A fashion watch isn’t like other watches. It says something; it tells a story about who you are. Typically, a fashion watch is defined as one made by a fashion brand. One that isn’t a watchmaker, and more a designer that chose to extend their product line to watches. With this in mind, if you’re looking for something with accurate movements or the latest smart features, this isn’t the category for you. However, if you’re looking for something that will command attention, we’ve got a selection of the best fashion watch brands in 2022.

We’re going to talk about some of the most well-known brands in the fashion watch market. What you probably don’t know is that the majority of them on this list are actually part of the Fossil Group: Michael Kors, Kate Spade, Guess, Emporio Armani and many others you probably didn’t even know about.

In terms of fashion, Calvin Klein is a household name. Timepieces from this storied brand are no exception to their well-known beautiful aesthetic and high level of craftsmanship. CK offers high-quality timepieces at an affordable price point, all in a variety of stylish styles and colours.

Let’s begin with an obvious one. Michael Kors is a fashion designer from America, famous for clothes, jewellery and other accessories.

The brand’s collection has various options in many different styles, from traditional timepieces to smartwatches.

To start, there’s the mini and petite for women, leading up to larger oversized watches for men, such as the delectable Slim Runway stainless steel Quartz. In between these, you’ll find mid-sizes for unisex options or those with no need for a specific wrist size. 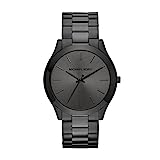 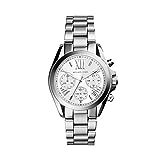 Since Tommy Hilfiger is synonymous with cool, it’s only natural that their line of clothing and accessories would also contain a selection of sharp watches. Tommy Hilfiger’s timeless designs may be paired with any formal or informal attire, and the iconic Tommy emblem is always there.

Kate Spade is synonymous with New York. Founded in 1993, this fashion brand has made a decent name in the watch industry. Again, with a background in clothes and handbags.

There are plenty of options to pick from, and they’re cost-accessible. You can pick up a Kate Spade for under $100. More recently, the brand has released hybrid and even smartwatches like the New York Scallop.

Whichever you go for, Kate Spade watches are fun. They’re bold and make use of popular colours for women like rose gold, gold and pink. For the price point, which is around $100 – $250, you get a decent build and quality materials. 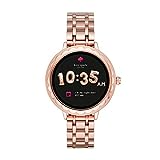 Watches from some of the world’s best watchmakers are also available from the industry leaders in Swiss army knife sales. Victorinox clocks are noted for their crisp and appealing appearance, straightforward function, and long-lasting quality. Due to the titanium’s small weight and high strength-to-weight ratio, they are as beautiful as they are durable.

Movado was created in La Chaux-de-Fonds, Switzerland, in 1881, the birthplace and national hub of superb Swiss watchmaking. To date, they have concentrated on presenting Swiss heritage watches with modern styles and new technologies at reasonable costs, since its start.

MVMT is a brand from LA (which already tells you everything you need to know about how fashionable it is). Known for producing some decent Quartz timepieces as well as, you guessed it, accessories. Only founded in 2013 but acquired by Movado three years ago, this brand builds an excellent reputation. In fact, their brand is growing at break-neck speed.

If you like a simple minimalist look, MVMT is a great choice for you.

Budget-wise, expect a price tag of around $150. A great example from MVMT belongs to the Duet Collection, the Rose gold stainless steel women’s chronograph with unique sunken subdials. 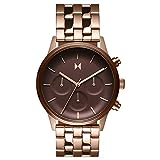 Here’s a brand you’ve probably heard of! If not, where have you been living? This is, first and foremost, a luxury clothing brand, but the fashion house has extended its offerings to fashion watches for both men and women.

Founded by the legend that is Giorgio Armani, there are a few brands under the founder’s name, such as, of course, Giorgio Armani, Armani Exchange and Emporio Armani. As such, there’s no typical look when it comes to any of the brands, but you’ll always find the logo on the dial.

Despite being a multinational, multi-million dollar company, their watches are surprisingly affordable. For example, the Emporio Armani Men’s Quartz Chronograph Dress Watch is under $140 and looks far more expensive than that. 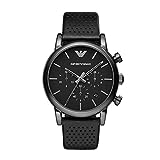 A Swiss watchmaker since 1883, Alpina Alpina has been creating timepieces. Anti-magnetic, shock, and water-resistant timepieces are available from the company, which is regarded a pioneer of modern sports watches. This company is recognised for the inventive and quality-driven approach to horology that they take to all of their creations.

We couldn’t ignore Guess if we’re creating a list of the best fashion watch brands. The American company has built somewhat of an empire since its conception 40 years ago. Firstly known for expensive jeans, Guess is now equally well-known for its watch collections.

Offering watches for both men and women, Guess offers a glamorous look, often featuring Swarovski crystals and cases in gold-tones.

The best part is, you’ll find the price tag doesn’t stray too far from $100 and often, under.

We love the 36mm multichain bracelet watch as an example of how much of a statement you can make if you opt for a Guess fashion watch.

Stuhrling has some of the most unique timepieces ever. For those who want to stand out from the crowd, this is the label to go for. They believe in delivering revolutionary designs at groundbreaking pricing because they believe in the power of design to change the world. This Brooklyn-based firm doesn’t use any showy advertising and instead lets its products do the talking.

From brassy and bold to quintessential vintage British. Daniel Wellington is an up and coming Swedish brand founded only ten years ago but has sold over 6 million timepieces worldwide.

Similarly to MVMT in terms of success, Daniel Wellington’s popularity started online. The backstory of where the name comes from is quite heartwarming.

When it comes to the style of DW watches, they’re unmistakable. Minimalist and beautiful. Round faces, little detail and sensational colour combinations. You’ll find all kinds of strap materials from leather, silicone, mesh and more. The most famous, though, is their NATO bands, as seen on the Classic Glasgow.

Here we come to Fossil itself. When we think of Fossil’s style, we think of leather cuff bands, Roman numerals and outdoorsy-looking timepieces from the 90s. However, today, Fossil is one of the best fashion watch brands in the world.

Take the Men’s Neutra Stainless Steel Quartz Chronograph, which costs under $100 and is comparable in looks to the Breitling Navitimer Super 8, which is 330x the price.

Fossil is perhaps the most standout on this list because, where other brands offer watches as an additional revenue stream, Fossil is watch-focussed.

The brand makes watches for men, woman and unisex options, from retro, Casio-looking digital watches, wooden watches and diamond, gold and silver toned options. When it comes to fashion, it really depends on your definition of the word, but Fossil has something for you (even smartwatches).

Most Fossil options cost under or around $100, but this goes up when you start introducing better quality materials and technology. 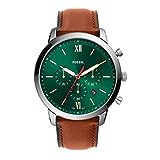 Swatch, the abbreviation for Swiss timepieces, creates timepieces that are beautiful, trendy, and ahead of their time. The company has been able to attract the youth market because of its low costs, as well as its utilisation of cutting-edge technologies and bold designs.

Hamilton is a Swiss-made watchmaker that sits a little higher in price than the rest of this list, but just before you get to the luxury level.

Hamilton offers superb quality watches with exceptional designs, especially compared to others around the $500 price mark.

More known for being designed with aviators in mind, but you tell us the Men’s H24515551 Ventura Analog Display Automatic Self-Winding Watch isn’t making a bold statement that says you know style. That’s because Hamilton’s other home is in Hollywood films.

For many people, Skagen appears to be a secretive Scandinavian watch brand. To be clear, they are a wholly-owned subsidiary of Fossil, which is based in the US. It’s hard to deny that they have a strong Scandinavian influence in their designs. These clocks are of the highest quality, despite their simplistic appearance.

We don’t think fashion watches necessarily have to mean household names. Larsson and Jennings are similar to Daniel Wellington, but they offer fashion-conscious, slim watches with minimalist Swedish style. Uncluttered dials and accurate Quartz movements for men and women.

If you like rectangular watches, you’ll want to check them out. In fact, if you really like them, we have a great article for you here.

Larrson and Jennings watches are typically made of good quality metals and give off the impression of luxury without the price tag. All watches in their collection are sub $200.

Scandinavian style is being brought to the globe by Nordgreen, a Danish brand that was designed by Jakob Wagner, a designer who worked with Bang & Olufsen. This watch brand has a current style covered with sleek, minimalistic watches for both men and women. If you’re still not convinced, consider the company’s core ideals, which go well beyond its aesthetics, functionality, and affordability. Customers at Nordgreen can give to one of three causes through their CSR programme.

Did you know that back in the 1960s, a third of all watches sold were produced by Timex? Probably not, why would you? America certainly recognised that Timex gave a lot of bang for your buck. The brand prides itself on offering sincere value for money and high-quality timepieces. As such, they’re also known for great innovation.

Timex has a longstanding reputation and is a commonplace name in shops. As such, you’d be forgiven for not thinking much of it, having been exposed to the name time and time again, kind of like with Rotary watches. However, dig around, and you’ll find some fascinating looks, limited editions and even collaborations.

They’ve been offering us their unique kind of attractive and utilitarian accessories since 1991, TOKYObay Incorporating aspects from both Tokyo and the San Francisco Bay Area, these timepieces have a real one-of-a-kind aesthetic.

That concludes our list of the best fashion watch brands to look out for in 2022. We’ve covered some of the obvious players and thrown in a few lesser-known ones for fun. We’ve given some flavours for men and women, so make sure you read our other articles to learn more about the brands we’ve mentioned.

You are here: Superwatches > Brands > Who are the 20 best fashion watch brands in 2023?