When it comes to watchmaking, a minimalist style has always been something to aim for. Simultaneously, watches have also become more complicated with advancements in technology. Brands now have to squish more and new features into a single timepiece whilst keeping it lightweight and comfortable to wear. As such, designers are rediscovering space. This demand for minimalist style has borne the arrival of ultra thin watches onto the market.

We’ve been demanding this elegance since the 1960s when the trend first came about. However, it disappeared in the noughties and has just now made a comeback. This trend has been seen in brands such as Bvlgari and Piaget, to name two.

The idea of ultra thin watches isn’t a new one, but it has been made iconic by Piaget when it released the Altiplano. In the late 1950s, Piaget released the Calibre 9P, which was the slimmest mechanical movement and subsequently fitted inside the thinnest watch the world had ever seen.

A 2mm hand-wound movement could be found inside, giving rise to watches no thicker than 4mm. Without any digital technology inside, the Calibre 9P is still one heck of a timepiece.

This pursuit of developing ultra thin watches isn’t new, but the efforts brands have been putting in has really ramped up over the last few years. Audemars Piguet released their perpetual calendar watch containing complex movements that totalled 6.3mm.

As a reaction, Bvlgari broke not one, but three world records with the Octo Finissimo Tourbillon Automatic. At the time, this was the world’s thinnest automatic tourbillon watch.

They’re great examples of how innovative watchmakers can cram so much into such a slim timepiece. Believe it or not, there’s no universal definition of what an ultra thin watch is; however, every watch here measures under 9mm for this list.

So without further ado, here’s our list of the 11 best ultra-thin watches for men in 2022. 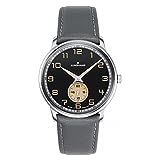 The Junghans Meister Driver is likened to the Christopher Ward C5. It has a slimline case that contains a hand-wound Peseux 7001 movement. What’s more, it has an Art Deco design and even tips its hat to the original speedometers made by Junghans back in the 1900s.

The Royal Oak has an iconic look. It has svelte lines and an ultra thin form. Whilst there are plenty of Royal Oak ultra thin watch variants in the range, the brand recently released a platinum-titanium mixed version for a truly lightweight experience. Whilst you may think this is a strange combination, the contrast between durable titanium and polished platinum creates a unique two-tone effect that’s irresistible.

This watch contains a 2121 automatic movement. It’s 8.1mm thick with a 39mm diameter.

Coming in at less than 6mm thickness, the C5 Malvern 595 from Christopher Ward is one of the contenders for ultra thin watch under $1,000. Despite its slimline nature, it has the opulent finish you’d expect from a high-end dress watch. This includes a domed opaline dial, protected by a double-curved sapphire crystal face with transparent case backing.

Released at the tail end of 2017, the Altiplano 910P lived a short life as Bvlgari’s thinnest automatic watch. That was until they released the Octo Finissimo Tourbillon Automatic less than 6 months later. Regardless, the Piaget is a fine watch with perfect engineering that doesn’t come with a Bvlgari price tag.

Piaget made this watch so flat using a peripheral rotor. Additionally, they integrated a baseline of the movement into the case design, to save space.

The Tetra Neomatik is thin even for an ultra thin watch, nevermind an automatic. This is due to the in-house DUW 3001 calibre. This is a slim movement of only 3.2mm in thickness. It has an uncluttered dial with subtle lugs on a watch that has beautifully minimalist proportions.

Inside you’ll find an automatic Nomos DUW 3001 movement. The watch is 7.3mm thick and only 33mm in width. 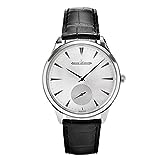 The Master Ultra Thin watch is a timeless timepiece that features a glistening silver dial, dauphine hands and a slight sub-dial at the six o’clock position. The movement is only 4mm and is based on a well-tried Jager movement that has been around for decades.

Inside you’ll find the Jaeger-LeCoultre 896/1 automatic movement. The watch is only 7.58mm thick and 38.5mm in width.

As a brand, Chopard likes to bend the traditional rules, but as design goes, the XP is a simple, modern, ultra thin watch for dress occasions. The dial is clear and uncluttered with subtle verticle brushing. This gives it a raw steel look, and on top of this, the numerals are a bold blue. If you need additional luxury, and why not, you can get a cashmere wristband.

The Drive de Cartier was released in 2017 too, but it could only be purchased in gold. In 2018, a stainless steel version was released, and the price dropped to under $6k. It kept the rounded square case original thinness.

Inside, you’ll find a hand-wound Piaget 430P with Cartier branding. The watch is 6.6mm thick and 39mm in diameter. 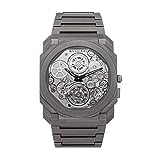 The Bvlgari Octo Finissimo is a famous timepiece for being stylish, but also being the thinnest of ultra thin watches, coming in at a slight 3.95mm. It contains an in-house movement is only 2.23mm. The range itself keeps expanding, with new ceramic, titanium and stainless steel versions being added in 2019. Plus, there’s an extraordinary skeleton dial version to boot. The bracelet has a unique angular look which is totally unlike anything else you’ll see. Thankfully, it’s incredibly comfortable to wear.

Inside is an automatic Bvlgari 138 movement. The watch is 3.95mm thick and 42mm in width. 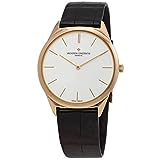 When it first came to market in 2010, the Historiques Ultra-Fine ‘55 took the top spot as the thinnest mechanical timepiece globally at 4.13mm. Somehow, other watches have come along with even smaller proportions, but that doesn’t shake how beautiful the Historiques is, and as such, it will remain a timeless timepiece. The hand-wound in-house calibre is an impossibly thin 1.3mm. It’s called 1955 after its year of release.

Finally, we get to another one of the best ultra thin watches for men that also comes in at less than $1,000. Most of these watches use a hand-wound movement to reduce the thickness, but somehow the Jazzmaster contains offers automatic winding and still only measures 8.5mm in height.

The Thinline comes in a few different colours which all shimmer in the sunlight. You can further opt for different dial colours, which also glitter. Old school lugs complete the look.

Check out what we think about the Hamilton brand, here. 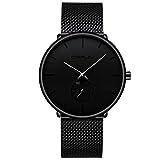 Its name is a great indicator of how the watch is. With a clean all-black look this FIZILI is not only thin in its band but also in the watch itself. The dial itself is a quartz stainless steel masterpiece accompanied by a steel mesh band complimenting its dial in ultra-lightweight.

Don’t stress because this band doesn’t pinch as some may think. Take advantage of its easy clasp and adjust it to the size that makes the perfect fit. With its sleek look, you may think it’s difficult to spot the time but the hands glow just enough to see the time. This holds true even if it’s underwater as it’s 3ATM water-resistant.

For those who love blue, this is a subtle ultra-thin watch for you. It’s a Swiss quartz movement which means you will never miss a beat because the time-keeping with this one is spot on. It features a blue leather band and a stainless steel case wrapped around a blue dial. Regardless of whether you are deep diving or it’s raining this watch is also 30 meters water-resistant.

With a sleek watch that looks like this, the last thing you want to do is bang it around. Having said that, because it’s made out of sapphire it’s more scratch-resistant and tough than some of the other thin options out there.

It’s possible to be both bold, minimalistic, and stunning all at the same time and the Lacoste Men’s Moon Ultra Slim certainly is just that. It’s a black dial featuring a few gold accents. The hands and the classic alligator represent the Lacoste logo. It’s a quartz movement with 30 meters of water resistance.

It features a two-hand black mm case finished in stainless steel and a black nylon strap. It’s not only stylish but also a comfortable option that is very lightweight. It’s also scratch-resistant which comes in handy for those who happen to move around quite a bit.

These are the best ultra-thin watches for men in 2022 and some are surprisingly cost-accessible at under $1,000.

If you’re looking for watches for men and the brands we’ve mentioned here are within your budget, why not check out our article on the best Swiss watches for men, here.

You are here: Superwatches > Buying Guides > Your Guide to the Best Ultra Thin Watches for Men in 2023