Garmin’s Fenix series of watches is widely considered the best outdoor and multisport timepiece available. With sophisticated features and high-quality materials, the Garmin Fenix 6 definitely lives up to expectations. For those of us that were waiting for the new release with the Touch screen Solar charging and much more, we recommend checking the new Fenix 7, for it is out. We also recommend comparing all the current Fenix and other Garmin models in this all-model comparison.

The Fenix 6 is essentially a collection of watches, similar to the Garmin Fenix 5 and 5+. Fenix 6 watches differ in size, and we’ll discuss minor differences later.

The range is available in three different sizes:

As well as the three sizes, the watches are available in a number of models. Models are identified by their letters after the 6S/6/6X in their names.

The technically 12 models are as follows:

A smaller version of the Fenix 6 is available. The only limitations are that it’s screen is visibly smaller at 1.2-inch and 240×240 pixel resolution.

The 6s comes in a Pro and Sapphire version.

This is the standard model. In addition to featuring all of the sophisticated features, this Garmin watch is built with Corning Gorilla Glass.

The 6X Pro also comes in a solar and sapphire version.

The Sapphire version has all the features found in the Pro model, additionally with scratch-resistant sapphire glass.

There is little difference between this model and the Sapphire. Except for the titanium crown, the watch is slightly lighter as a result. 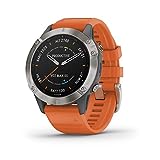 In terms of functionality, the Pro Solar and Sapphire models are identical. Solar Power Glass is only found on the Pro Solar model, allowing the battery to last longer using solar power.

Improvements from the Fenix 5+ 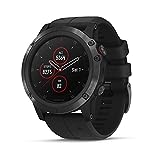 The Fenix 6 range all have always-on displays. Designed for outdoor use, they can be read in all kinds of lighting.

In both smartwatch mode and GPS mode, as well as in GPS+Music mode, the Garmin Fenix 6 collection has seen battery life significantly improve.

The GPS mode, for example, has been improved from the Fenix 5. A brand-new feature of the Garmin Fenix 6 is its Power Manager, which shows you your remaining battery life, and it is in hours instead of percentages. Power Manager makes switching between various Power Modes a breeze, allowing you to manage your watch’s battery life and conserve energy when you don’t need all of its features.

Thanks to a revolutionary new tech, “Power Glass,” the 6X Pro Solar can collect solar power and prolong its battery life. Battery life can be increased by more than 50% using the Solar feature while in battery-saving mode. Any time you need it, you’ll be able to check how much energy your watch is gathering from the sun with a smart solar indicator and widget.

The 6X Pro Solar, the most expensive watch in the range, has an additional 10% battery life. The concept of never having to plug into your watch due to your solar power is enticing.

Both the Garmin Fenix 6 and 6S have reduced the lug-to-lug gap (the distance between the case and the strap). Their slim, stylish looks are a result of this.

Garmin Fenix 6 series watches have been extensively tested and have met military standards. Garmin believes that the watches are accredited to the highest level.

You’ll quickly get used to the menu layout if you’ve used a Garmin watch from the midclass or above.

If you’ve ever used a Garmin watch from the mid-class or above, you’ll soon get used to the menu layout – the differences are minor. You now have the option to receive information from several widgets simultaneously in Widgets, the most significant change. The Fenix 5+ has separate pages for each widget. Activities and navigation may now display more sophisticated information.

Garmin has updated Fenix 6’s user interface to improve the activities experience. As well as allowing users to access gauges and regular data fields simultaneously, the user now has the option of having up to 8 data fields open simultaneously.

The memory capacity of the Fenix 6 is twice that of the Garmin Fenix 5+. This indicates that there is room for additional maps and music.

Rather like a car navigation system, the Fenix 6 comes preloaded with a European topographical map with turn-by-turn navigation.

When using Fenix 6, you can find the best routes for running or biking (depending on whether you are running or bicycling).

The maps have various appearances for different activities (running, biking, skiing, walking, etc.) so that you can obtain the information you need for the kind of activity you’re doing with just a single glance.

The Fenix 6 now has a piste map with over 2000 ski locations as a new feature. The maps are so simple to read that you can see the specific ifts, pistes, and difficulty levels with just a quick look.

The Fenix 6 has a new training feature called PacePro. Maintaining your ideal pace throughout a trip is made easy with the new PacePro feature. You could use it to track half or full marathons.

The watch also monitors your body for how quickly it adapts to different environments. Running, cycling, and triathlon competitors who frequently travel for competitions would benefit from this feature. The watch can inform you when you’ve become used to it and are ready to give it your all.

Garmin’s Fenix 6 comes with the latest wrist-based heart rate monitor. The monitor can be used 24/7, seven days a week, to record your heart rate during any activity.

The wrist-based monitor now also works underwater, enabling you to use it while swimming!

The PulseOx sensor can monitor the oxygen content in your blood and is included in every watch in the Garmin Fenix 6 line. This feature is particularly essential for mountain climbers and anybody else who spends time in the mountains. What it can tell you is how effectively your body adjusts to the reduced oxygen levels while you’re up there, which may help you figure out how quickly you can ascend.

The Fenix 6 is upgraded with the latest training functions that were introduced with the Garmin Forerunner 945, compared to the Fenix 5+.

The Fenix 6 monitors your training progress and monitors how your training impacts your shape, whether in a good or negative way. The watch also categorizes your workouts and gives you an overview of how much stress you’re placing on your body, such as how much of it is anaerobic, extremely aerobic, or somewhat aerobic. Based on this, the watch may suggest what kind of exercise you should perform to enhance your shape in a good way.

The Fenix 6 also includes suggested recuperation periods, which may help you avoid overworking your body.

The watch can also provide sophisticated running and cycling dynamics measures, similar to the Garmin Fenix 5+. However, you’ll need some additional gear.

The Garmin Fenix 6 features a built-in music capability that allows you to listen to music or podcasts without bringing your phone with you. The Spotify app is pre-installed on the watch, so all you have to do now is download your offline playlists and music from your smartphone or desktop to your watch (requires a Premium subscription).

You may also transfer mp3 files or music from Deezer.

To listen to music from your Fenix 6, you’ll need a set of cordless Bluetooth headphones.

Garmin Pay allows you to pay on any contactless machine directly with your watch through the Fenix 6. Then, make sure your Garmin Connect app is downloaded to your smartphone, then you are ready to go. There are only a few banks and credit cards that are compatible with Garmin Pay, though.

With the Garmin Fenix 6, you will always be in complete control of your current direction and position, thanks to the barometric altitude meter and a 3-axis compass, both of which are calibrated automatically.

The Fenix 6 includes a safety feature that can notify your nearest and dearest if you are involved in an accident.

In the Garmin Connect app, you can register up to three contacts who will be notified in case of an accident.

The feature operates by registering any strong force (such as when you fall) followed by a period of inactivity. A message will then be sent to your contacts informing them of the incident. Even if you’ve been picked up by an ambulance, there will be a live-track GPS link in the message with your precise position so they can know where you are.

It is also possible to send the message manually if you suffer an injury unexpectedly. Simply press and hold the top left button for 5 seconds until the watch vibrates three times.

NB: This feature is only available if your smartphone is nearby and connected with your watch.

The Garmin Fenix 6 comes preloaded with a plethora of specialized training, sports, and activity applications. These apps make it simple to keep track of your activities, monitor your progress, and improve your results. A new Off-Piste/Backcountry Skiing app is available for the Fenix 6.

Similar to the Fenix 5+, the activity profiles are the same.

A Fenix 6 will monitor all of your most important data and gives you actionable insight into your current activity level. Among other things, the Fenix 6 monitors your stress level, steps, heart rate, calories, and sleep quality.

You can also receive smart notifications on your Fenix 6 from your smartphone, including calls, texts, emails, Facebook notifications, weather alerts, traffic alarms, and calendar reminders.

Garmin has yet to embrace sleep monitoring in the same way that Polar and Fitbit have, with their devices providing a wealth of information about your night’s sleep. A Fenix 6 will break down your sleep into light, deep, and REM sleep, as well as any times of wakefulness, but you’ll just receive a graph of your movement throughout the night.

You can now buy the latest and leading series of the Fenix Smartwatch, the Fenix 7.

Among the most powerful sports watches on the market, Garmin’s Fenix 6 series boasts a lot of features, including extensive tracking and analysis, music storage, and navigation with color maps built-in.

In addition to being lighter and thinner than the Fenix 5 series, the watches have larger displays and more battery life, especially with models that feature solar panels on the watch faces.

Only the Garmin Forerunner 945 can rival the Fenix 6, but the latter has a greater sense of luxury. The only downside is that it will cost you a lot of money to obtain it.

You are here: Superwatches > Brands > The Garmin Fenix 6 Range Explained