Mad Men is an award-winning TV show that stars John Hamm as Don Draper. It’s a period drama set in the 1960s, with seven seasons of excellent acting, and amazing costumes. One of the key areas that gave this show its popularity was the amazing costume design and attention to detail. In fact, many of the awards won by the show were for costume design! Fans quickly came to love the many different watches that the character Don Draper wore. Here’s a closer look at each:

During the first series, Don Draper wears a Jaeger-LeCoultre Memovox watch – a stylish timepiece with a simple design. It has a brown leather strap, two bezels, a date window, and luminous hour hands. The watch is from the 1950s. While there is an updated version, you can only get the original version in the vintage form if you are lucky. However, the newer models offer the same quality and attention to detail as the original version, making them a great choice for any watch lover.

The name Memovox literally means ‘voice of remembering. At the time of release, it was a significant design because it was an automatic watch that offered an alarm feature. After the initial watch release, more Memovox devices were produced and made popular with watch consumers. 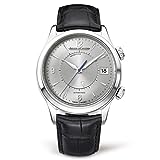 When Mad Men returned for a second series, Don Draper sports a Jaeger-LeCoultre Reverso. The watch change showed viewers that the character is more successful, as he became a partner at Sterling Cooper. The watch was originally released in the 1930s. It had a rectangular face with a white dial that looked sophisticated and expensive on the wrist. Interestingly, the watch is still a popular choice today.

One interesting capability of this watch is a flip case. If the screen gets damaged, turn it back! The watch comes with a leather strap and gold case that signifies the company wealth that went into making the watch. Interestingly, the company released an ultra-thin model in 2012 for fans of the show with a limited edition offering that included a Mad Men-themed logo.

In Series 4, Don Draper works on a Rolex account, and he wears an expensive Rolex Explorer. The watch comes with a stainless steel case, has a black dial and luminous hour marks, offering a sleek look. Rolex continues to enjoy popularity with watch lovers all over the globe. This model is a particular favorite that is now difficult to get hold of for collectors.

Released in 1953, it was created in commemoration of Sir Edmund Hillary’s Everest expedition. The watch upgraded, but the general look of the watch never changed much because of its popularity. In terms of the Mad Men fans, this watch caused some fierce debate, with many viewers feeling that the version used by the show was too ahead of the time. Even though it received so many negative comments from fans, the watch remained popular and in demand.

As series 5 begins, viewers can see that Don Draper is wearing an Omega Seamaster DeVille – a specialty dress timepiece that has a luxury black strap, a black dial, cream face, gold hour markers, and a date window. It also has one right-hand bezel. The Seamaster series was originally a diving watch, but the DeVille version is a dress watch with an elegant finish.

In terms of the show, many believe producers chose this watch because it’s less of a statement piece than previous watches Draper wore. This is purposeful, to show the audience that the character is wiser, though he still enjoys wearing high-quality watches. If you wanted to get hold of one of the original Seamaster DeVille’s—you might not find one. However, there are still a number of later DeVille models for sale from watch collectors.

It was not just Don Draper’s watch collection that got audiences involved—other characters also got to wear some beautiful timepieces as part of their costume. Firstly, Ken Cosgrove wears a Hamilton Electric – a quirky watch that delighted viewers in series 3.

Pete Campbell’s watch in series five also deserves mention – the 1955 Hamilton Sputnik. The character wears it throughout the series and offers a bit of class with the brown leather strap and the gold dial with a cream watch face.

Finally, we also see Roger Sterling wearing a Tudor Oyster Prince in both series 5 and 6. This watch has a brown leather strap and a tuxedo dial that exudes class and wealth. This watch was released in the 50’s – supporting the idea that the costume team spent a lot of time finding the best watch options for an observant audience.

Getting hold of any of these watches is a difficult feat with upgrades and decommissions. However, if you are a true fan of Mad Men and don’t mind taking your time, you may be lucky to find one on sale online one day!

If you’re a fan of celebrity watches, why not check out these stunning timepieces worn by James Bond?