Released on July 4th in China, the Xiaomi Band 7 Pro is here to offer a more innovative take on the standard Mi Band 7.

Known worldwide as the Xiaomi Smart Band 7 Pro, this watch is worth a look! Especially if you’re ready for some cutting-edge tech.

Pro smartwatch variants can be exciting and sometimes better than the original. We’ve tested this watch and our first impression is that it is a very good watch. The screen and design are significantly different than the band so if you like bigger screens then this is the watch for you. In terms of features – the difference isn’t that big at the moment though. The addition of GPS is a plus. We’ve also tested Alexa on the watch and found it only works intermittently and isn’t always able to connect and listen to commands. We expect this feature to be updated and work better in future updates.

Before we jump in, let’s take a little look at Xiaomi, the Mi Band producer.

Xiaomi was founded in 2010. Since then, they have risen to become China’s biggest smartphone producer. Its devices are a common choice among the Chinese population. Even though the company is still very young, its success has led to global sales. And while it may not yet be a household name in the US, its fitness bands are selling fast!

From design to sports, let’s take a look at the latest features included on this new wearable.

Design is one of the key features to explore when buying a new smartwatch. So, how does the Pro Mi Band 7 measure up?

The Pro watch comes with a 50% larger screen, allowing much more visibility than the standard model. Easier access to menu navigation, the time, and any on-the-go fitness details.

However, the Pro also features an 8mm wider design, so if you’re a sucker for slim watches, this might not be for you. It’s also reported that the Smart Band 7 Pro feels 50% weightier, yet it’s only 20g heavier – so not much at all.

There’s also a new strap/band fastening on the Pro variant. This re-design allows the fastening mechanism to attach to the watch’s body like most smartwatch bands. Easier, quicker, and optimized.

Color options for this smart band include:

What’s new and updated for the Mi Band 7 Pro? Here are all of the updates you need to know. 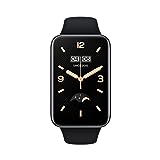 But what’s the catch? Well, none! These features measure up to their name, allowing users to manage their life and fitness with ease.

Currently, the only issue with the Smart Band 7 Pro is complaints about erratic sleep measurements. But this seems to depend on the specific watch, and it’s not across the board.

Some users are also confused about seemingly “random” sports modes. For example, checkers and snowmobiles are two sports options on offer. Though odd, they don’t affect your smartwatch usage at all.

Ready to embrace this smart band? Here’s how much the band is currently retailing for.

You can find some deals for the Smart Band Pro on Aliexpress or eBay.

Both smart bands are now available across markets worldwide, but the global releases look a little different to the Chinese options.

Plus, the Mi Band 7 Pro is sold under the name “Xiaomi Smart Band 7 Pro” – so note this down before you hit the stores!

Got some more questions? We might have an answer. See the latest Mi Band 7 Pro questions and answers below!

Is The Mi Band 7 Pro a smartwatch or fitness band?

The gap between smartwatches and fitness bands is ever-shrinking. However, the key differences include the appearance of third-party apps, cellular calls, and texting. The Mi Band 7 Pro sits right in the middle, offering both types of features. It’s essentially a hybrid between a band and a smartwatch.

Why is it called the ‘Smart Band 7 Pro’?

Been Googling the Mi Band 7 Pro, but only finding the ‘Smart Band’? The Pro variant of the Mi Band 7 has been named ‘Smart Band 7 Pro’ for the watch’s global release. Though they’re very similar, the pro is the larger and more complex model. It offers “smarter” features so hence the name change.

Where are NFC payments?

NFC payments aren’t on offer on the global model. That’s right, you can only access contactless payments on the Chinese Pro models. This goes for the Mi Band 7 too. So, if this is a deal breaker for you, you might need to expand your search.

On-wrist third-party apps are more in-demand than ever. However, the Smart Band 7 Pro doesn’t offer third-party app compatibility. The watch is a fitness band, despite the fact it looks like a smartwatch.

Can I make on-wrist calls?

On-wrist calls aren’t available with this smart band. There’s no cellular variant, nor built-in microphone. This also means you can’t use voice assistance either. Maybe next time!

With a larger screen, long battery life, and an always-on AMOLED display, this re-imagined Pro variant is no doubt a popular pick.

However, with the original Mi Band 7 sitting at half the price of the Pro option, we expect many to experiment with the affordable option before diving into the world of Probands. It really depends on what you need because the Pro does offer more features, a better screen and is still relatively cheap. What do you think? Let us know which band is on your radar in the comments.

You are here: Superwatches > Brands > Mi Band 7 Pro – Everything you Need to Know