The demand for smartwatches in 2020 has grown from previous years. Brands are introducing their latest devices to the market. Competition is intense as every manufacturer is working flat out to have the latest tech on their products.

So if you’re buying a smartwatch in 2020 you need to know which smartwatches to be watching. And here is a rundown of the brands and models which are set to dominate this competitive market next year.

Is The Apple Watch The Best Smartwatch?

When many people think about smartwatches, the first one that springs to mind is the Apple Watch. Arguably, this brand is synonymous with the word“smartwatch, and currently, the Apple Watch Series remains the top-selling brand worldwide. At the present, there are 7 versions of the Apple Watch.

How Does The Samsung Galaxy Watch Compare With The Apple Watch?

Since the 2018 version was quite bulky, the 3 has a slimmer design. Also, there have been OS improvements, along with the assistant, which has been brought up to a level comparable with Apple’s Siri.

You can read the full review of the Samsung Galaxy Watch 3, here.

Is The Garmin Fenix 6X Pro Worth The Cost?

Famous for its accurate GPS systems, Garmin produces some of the very best fitness tracking equipment available. Garmin smartwatches are perfect for anyone who lives an active lifestyle thanks to very effective sports and activity tracking. Garmin’s Fenix smartwatch series has proved to be very popular due to its great features including its preloaded maps and its music storage capacity.

The Fenix 6X Pro came out this year. And the new model has an even more stylish and slim design and more impressive features. Additionally, the GPS is better, for a start. And there are new sensors, NFC, Easy Payment and the capacity to download music to the device offline.

See how the Garmin Fenix 6X Pro compares to the new Apple Watch 6. 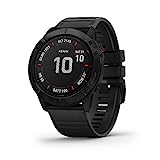 Fitbit is a company which is known only for its fitness trackers and smartwatches. This sets it apart from other brands like Samsung and Apple, which produce a wide range of other tech devices. Nevertheless, that doesn’t mean that Fitbit’s devices can’t compete in the marketplace.

The Versa 2 was, arguably, the best device from the entire Fitbit range. It offered a host of downloadable fitness apps which work well with the many sensors integrated into the watch. 2020 saw a new version of the Fitbit Versa, the Versa 3, which will be an even better and more upgraded version of this device.

Futher, Fitbit has also released the Sense, which is giving the new Apple SE and Series 6 a run for their money. And with temperature and ECG sensors and a focus on stress management, the Fitbit Sense is a great addition to smartwatches in 2020.

Is Google Going To Release A Smartwatch?

Rumours have abounded for years about the release of the Google Pixel Watch, and 2020 looks like it could finally be the year when this device hits the market!

As yet, nothing has been confirmed by the manufacturer about its specifications, but it goes without saying that the hardware will be of the highest quality. More, it may also come with integrated LTE and Wi-Fi, and rumours suggest that it could come with as much as 1 GB of RAM.

Will Microsoft Be Releasing Its Own Smartwatch?

Everyone knows the Microsoft brand, but it’s a name that’s most commonly associated with PCs and laptops. Previously, when the manufacturer tried to move into the mobile device sector it didn’t have much success. Nevertheless, the gossip is that Microsoft is looking to release a smartwatch of its own, powered by the Windows OS. And we’re waiting with bated breath to find out whether this will happen, and if so, what can be expected of this exciting and innovative new device.

The current rumours have suggested it could feature a body made from oxynitride aluminium and a square-shaped design. The battery is rumoured to be long-lasting and it may have both Wi-Fi and Bluetooth connectivity. Currently, the prototype of this watch is being tested, so it’s very likely that 2020 will see the arrival of Microsoft’s first smartwatch.

These are just some of the smartwatches in 2020 to watch out for. Whether you’re planning to buy one for yourself or for someone special, one of these innovative new devices is sure to fit the bill.

You are here: Superwatches > Buying Guides > New Smartwatches in 2020