The Apple Watch SE was revealed this week along with the Apple Watch 6. It’s been marketed as the more accessible Apple Watch and it really is. People should not be fooled into thinking it is a cheap version.

It’s stripped back, but it’s got a powerful punch. If you compared the SE to an Apple Watch Series 3, you’d see that you get a superior model for your money.

With that, people are referring to the SE as the successor of the Apple Watch 3 and that’s a fair assessment. The Series 3 is not being reduced in price and is still available around $264.

The Apple Watch SE is by no means ‘cheap’. It’s less than a Galaxy Watch 3, granted, but it lines up with the eagerly anticipated Fitbit Versa 3, Oppo Watch and Huawei Watch GT2.

Here’s everything you’ll want to know about the new Apple Watch SE.

The design is the same as the Apple Watch Series 6, but doesn’t come in as many options. It got its shape from the Series 4, although naturally Apple have made some minor changes and the SE is incredibly sleek. You get the same dimensions and display (including the resolution) as the Series 6, so you can trust you’re getting a quality visual experience.

It comes in the standard 40mm and 44mm sizing.

It will come in an LTE version. This will not only be capable of making phone calls, but thanks to the latest WearOS 7 on board, allows users to enjoy the new Family Setup feature. This makes the SE a great smartwatch for families with kids or elderly relatives. The user can pair a Watch with an iPhone. Meaning, you can limit the use of the watch for kids (things like only sending messages to trusted contacts or selected app downloads). Best of all, no one will get lost by using the location tracking features. Safety is paramount!

The SE doesn’t come with the newer S6 chip, and that’s the compromise you make. There’s an S5 chip inside but it’s still twice as fast as the Series 3. You’ll need this as Apple’s apps continue to improve.

You shouldn’t expect the ECG and blood oxygen sensors, so the SE is more a smartwatch than fitness and health tracker.

You don’t get an always-on display, so you still need to flick your wrist to see your notifications or the time.

Don’t fear, it’s not all cut-backs; you get access to new features.

SE and Series 6 users can both enjoy the accurate accelerometer and altimeter as well as noise monitoring, fall detection and improved emergency SOS features. 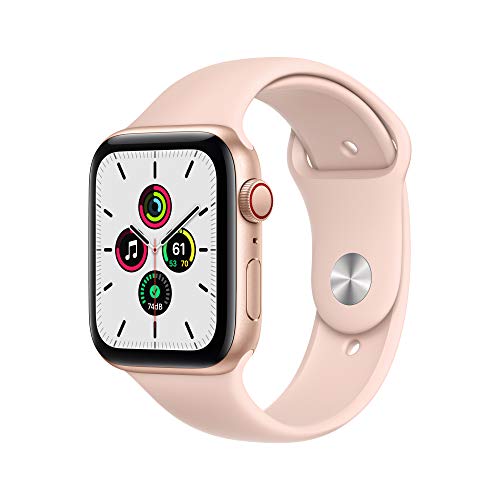 You can order your SE (or 6) right now and shipping starts Friday, September 18th.

Apple launched two new smartwatches this week (on September 15th), the Apple Watch 6 and Apple Watch SE. They both run on the new Wear0S 7 and both come in wifi-only and cellular variants, but the Watch SE has been consciously designed to be cost-effective. It offers fewer features and runs on a less cutting-edge S5 chip, but that does not make it the poor person’s Apple Watch.

If you’re interested in an Apple Watch and it’s either your first time or you’re not sure which model to get next, we’re going to compare them for you here,

Off the bat, they look incredibly similar. The Series 6 is available in more variants, though.

Both the 6 and SE offer the same display (including the same resolution), so to the eye you get the same experience. They’re both water-resistant so you can confidently take them swimming. Apple has offered users two new bands; the Solo and the Braided Solo.

The Watch 6 comes in more colour and design choices. Additionally to the usual grey, silver, gold and aluminium, the Apple Watch 6 comes in a new blue and never-before-seen red. You can opt for a steel or titanium version, of which both come in different colours.

The well-known fashion brand Hermes has teamed up with Apple to offer exclusive bands in different materials and colours for the Series 6.

The Series 6 continues the always-on feature. This was first seen on the Series 5 last year. This feature means your display is literally always on so you don’t have to flick your wrist to turn it on to check the time or your notifications.

The Apple Watch Series 6 comes with the S6 chipset; the latest from Apple. The SE, on the other hand, comes with the S5. The whole point is that the SE had to make some sacrifices to be more accessible and this is one of those elements. Users will notice that the SE isn’t as advanced as the 6. Apple did claim the SE is still twice as fast as the 2017 Series 3.

The Series 6 comes with an Ultra Wideband (also known as a U1 chip). This is what you typically see in an iPhone, starting with the 11 onward. It’s used for spacial awareness and its function is to allow devices to find other devices with accuracy, albeit within short distances. Apple said this was being used to further develop AirDrop, the service that allows an iPhone user to share things with other iPhones in close proximity. Apple teases us with their promise that this is just the beginning of what they’re planning. People have suggested that the U1 will be used for Apple’s tile tracking device, which has been rumoured for a while.

One huge difference between not only the Apple Watch 6 and Apple Watch SE, but all predecessors is the addition of the blood oxygen sensor. More commonly referred to as an oximeter. This will track key information about your breathing and blood circulation. Getting a reading will take exactly 15 seconds. This will give insight into your overall cardiac and respiratory health. It’s been coined the “COVID-catching watch” as blood oxygen levels can tell us how deeply this virus is affecting the body. You can read more on how smartwatches are diagnosing COVID-19 in our article.

There’s an app that accompanies the oximeter. It will continually take measurements in the background (like when you’re asleep), but you’re able to take a manual reading any time you like. The data will be shown in the Health app and you can monitor changes and trends.

Both devices have an optical heart rate sensor which will keep an eye on your heart rate. The Series 6 has the accompanying ECG app, which we saw make its debut on the Series 4. This will catch an irregular heartbeat.

As we’ve said, both devices run on WearOS 7. New to this version is the Family Setup feature. This lets a user pair either device with an iPhone. This is great for people with kids or elderly relatives. You can do things like limit which contacts the watch can send messages to, apply controls over app downloads or set automatic location tracking. Breaking away from the norm for Apple, the other user doesn’t have to have an iPhone to use this feature. We wrote more on this and why it’s great for families with kids, here.

Aside from Family Setup, WearOS 7 comes with new watch faces including Memojis.

There have been a few other exciting updates like noise level monitoring, fall detection, more accurate altimeter (which Apple say will detect to one foot of difference) and emergency SOS contacting.

The Series 6 takes the throne from the Series 5. Happily, the pricing remains the same.

The cellular versions of either will add $100 to the tag