Diesel’s latest offering to the smartwatch world has been widely seen as a positive, with a smaller design and price tag on offer; it now seems that more people will be able to enjoy this beautifully designed watch. Check out all the details in our latest review.

Why Is The Design So Impressive?

The new Diesel On Fadelite offers something brand new to Diesel fans; the Fadelite has no metal and is smaller than previous watch offerings, making it more accessible to a broader audience. The body of the watch comes in at 43mm. This makes it big enough to read, but not so big that it takes over your entire wrist. You navigate the watch using the crown and simply rotate it to access the menus.

The name Fadelite is reflected in the watch strap. It fades as it reaches from one end to the other, setting it apart from the more generic smartwatches that look the same. There are three strap color choices, so you can get the watch that best reflects your personality. The only issue is that the strap is pretty thick. That makes it hard to shape when you first start wearing it. It is worth the effort, though. In no time at all, you will have the perfect fit around your wrist. 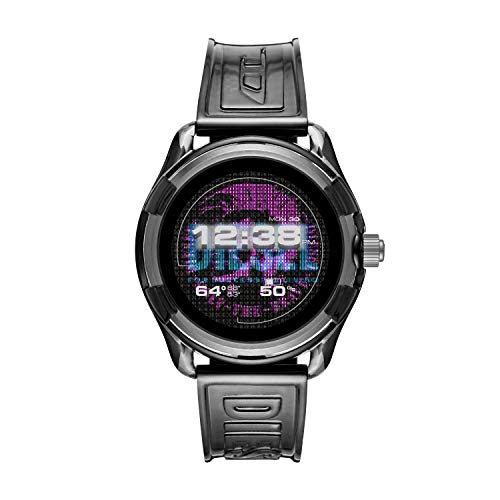 How Expensive Is the Diesel On Fadelite?

It is affordable for most markets and most pockets that want to invest in a quality smartwatch. This means that the number of consumers that can now access a piece of designer wear is more expansive than ever before. We think that makes it even more special. With such a reasonable price, this watch is proving to be popular across a wider market range. Furthermore, younger audiences are certainly enjoying this tech’s price tag.

What Can I Expect the Diesel On Fadelite To Do?

This watch is absolutely packed full of great features that will make your life easier than ever before! GPS tracking so you can track all your exercise journeys, contactless payment capabilities, and a heart rate monitor to help you keep an eye on your performance. While you can’t look forward to an in-built speaker, you can connect your Bluetooth headphones to listen to all your favorite tunes when you are working out. It is also swim-proof, so you don’t need to worry about storing it safely when you are at the beach.

The watch is powered by Qualcomm Snapdragon 3100 and makes use of Google Wear OS, making it simple to transition from another Wear OS watch. You can download a range of apps to personalize your watch and can look forward to exclusive watch faces to give it that all-over Diesel look.

How Long Is the Battery Life?

The major downside to this watch is that the battery life is not great. It comes with claims of a 48-hour battery, but we found it to be far less when in use. You can opt for the extended mode to push your battery over into the second day of use, but you need to be prepared for minimal smart features to be in use. If you are looking to have all your smart features enabled throughout the day, then you are more likely to notice your battery waning after around 20 hours.

To fully charge the watch, you need just over an hour and a half, but it does well when plugged in for short 15-minute bursts, making it easy to plug in when you have some desk time to work through. Ultimately, If you want to enjoy the great features this watch offers, you may need to compromise on the battery life. 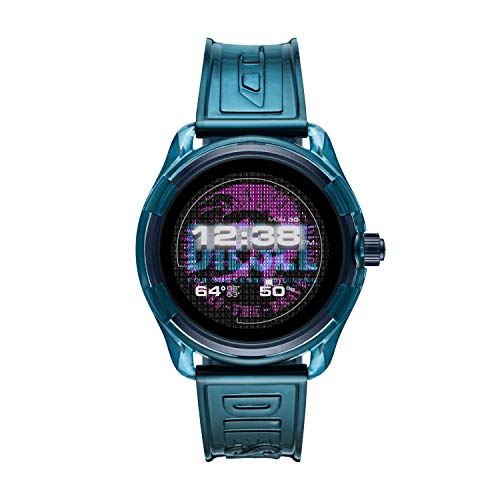 The Pros and Cons Of the Diesel On Fadelite

Before you make a final decision on whether to buy this watch or not, it is important to understand the pros and cons. We have summarised the main points below for your consideration:

Should You Buy a Diesel On Fadelite?

If you are keen to buy a Fadelite, then you will not be disappointed. This watch offers lots of great features as well as a sense of exclusivity, all for a mid-range price. Once you have molded the strap to fit your wrist, you will find it comfortable to wear, and as it is smaller than previous Diesel models, you can expect not to notice it when it is in use.

The big downside to this watch is the poor battery life, meaning that you will have to plan out times where you can charge to maximize the amount of use you get. If frequent charging is not too much of a problem for you, then you can look forward to owning a well-designed watch that is sure to be a talking point wherever you go. 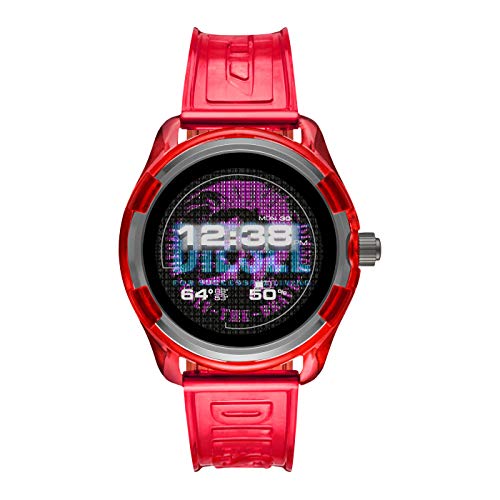 Emma is an experienced Editor, Copywriter and Visual Editor. When not working, Emma enjoys life with her baby girl, partner and Jack Russell Terrier in the lovely countryside of the South West UK.

The Diesel On Full Guard 2.5 ($199.99) is a stylish Wear OS smartwatch with fitness capabilities.

The fashion-minded will love this Fossil Group production. In development, it had the same treatment as the fourth-generation smartwatches. This translates to contactless payments, a heart rate monitor, built-in GPS and the safety of water-resistance. There are very few reasons to take it off. Which you’re unlikely to, as it carries a design iconic to Diesel fans.

It comes in at just shy of $200 if you’re considering the stainless steel option. Certainly cheaper than the Apple Watch Series 5 or Galaxy from Samsung. Still, it costs more than a Fitbit Versa 2.

The first version of the On Full Guard was clunky. The software was a little underdeveloped. The battery life was poor. The 2.5 sees improvement across the board. 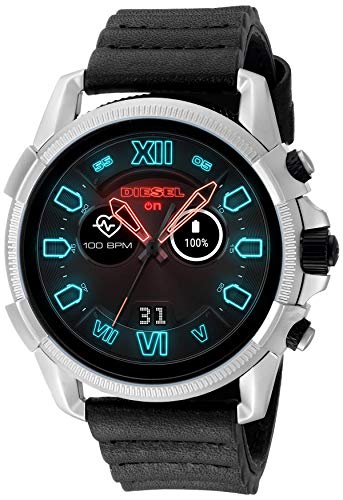 If you’re into Diesel already then you’ll love what you see. It’s inspired by the classic Diesel watch design. Very industrial.

There are 4 options. You can choose brown leather or silicone strap. The former is a little more expensive but looks awesome with the stainless steel.

Whilst the case is a hulk, this version isn’t as cumbersome as the first iteration. The diameter is the same, it’s 1mm thinner and considering the additional features, it’s actually lighter.

Some features remain. Two twistable personalised buttons. These sandwich the rotating crown which then gives you a way of navigating the menus. Great for those who don’t want to totally rely on the touchscreen alone.

The screen is a bold AMOLED that reads perfectly. It’s been shaved by 0.1mm to 1.39mm.

The best bit about this version is that it’s water-resistant. Similar to the Skagen Falster 2, you’re able to swim in this watch. It’ll track your activities via a third-party app. The silicon strap is certainly better if you’re a swimmer.

As with the first version, the 2.5 operates on Wear OS. This means you get notifications, bespoke watch faces (including a funky neon), Google Assistant and third-party apps.

If you’ve been a Wear OS user before then you’ll get everything you’re used to. Google has made improvements to the interface. Google Fit had a software revamp. You swipe for notifications. It’s easy to turn Do Not Disturb on or change the brightness of the screen.

Wear OS is a fair contender but it doesn’t hold a torch to alternatives like Apple, Samsung or even Fitbit. The core features work consistently, but it’s just not as evolved as the others.

Diesel made this feel like more than just a host for Google software. They have given the user a load of individual watch faces. Some are very on-brand for Diesel.

There’s an additional app called Dial Effects. This lets you see secondary information like the weather or your activity.

There’s the stylish T-On-i, which gives you an overview of your day which includes the weather and your step count. It’s more novel than the choices that come with the watch, but it’s another way to make it uniquely yours.

There are no major complaints about the software. The watch is run on a Snapdragon 2100 Qualcomm processor. There is a newer version of this, the 3100, but Diesel didn’t put it in. Reasons unknown. Perhaps the hardware isn’t able to handle it. This can give a laggy performance at times. It’s possible there could be an update in the future which would fix any frustrations.

Some question their necessity. It’s a smartwatch with fitness features, not a fitness tracker. This is similar to the likes of Fossil for the recreational fitness fan. They’re alright, but if you’re serious about sport then this isn’t the brand you want on your wrist for your training sessions.

Accuracy of the GPS seems to be fine for 5k runs. Heart rate tracking for exercise is generous in comparison to a heart rate chest strap for measure. Again, this watch is better for its convenience than as a dedicated fitness tracker.

If you’re relying on Google Fit, you’re advised to try a third-party app instead. The Google experience is a little lacking. It’s alright if you want an overview of your activities during the day but it can be underwhelming on data.

The battery power is a lot better than the first version. You’ll get two days out of it. The first Full Guard would give you a day at best.

For Wear smartwatches, between one and two days is about what you get. Two days is wishful thinking. The brightness and apps drain it pretty quickly. 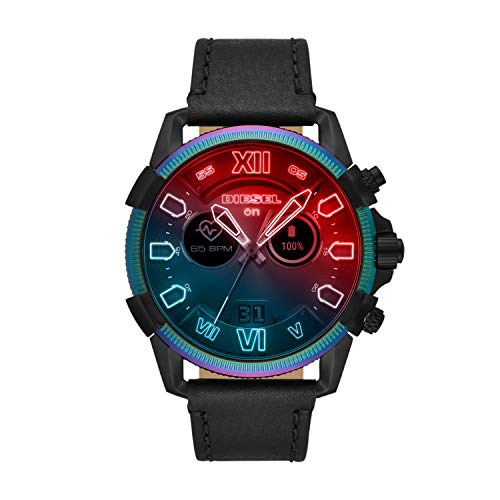 If you’re a Diesel fan this is a great smartwatch for you. If you have a casual interest in your fitness level and want something that looks masculine, you’ll love it.

However, if you’re looking for more of a sports watch with smart capabilities, we point you to the Garmin Forerunner 945.