Mobvoi has released their latest watch, and shockingly they are not using Wear-OS this time round! The TicWatch GTX makes use of a proprietary operating system, and while it is not as sophisticated as Wear-OS, it has given them the ability to personalise what they offer to their customers. With a whole host of features, this watch may be the perfect choice for your next piece of wrist wear.

The TicWatch GTX is a black device that has a 1.28-inch screen and a 240 x 240 display. It has a colour screen that lights up well when in use and is clear to read so that you are always in the know. There are two crown buttons that you can operate the device with and with a second hand, you will always be able to know precisely how fast you complete your exercise.

The watch is comfortable to wear and is not garish or too large on the wrist, and you can even personalise your watch face from a library of suitable options. The strap is made from Thermoplastic Polyurethane that is 20mm thick and feels surprisingly comfortable on the wrist. In fact, once you have gotten used to it being on your wrist, you will forget it is even there until a notification springs up for you to check.

How Good Are the Mobvoi TicWatch GTX Features?

The TicWatch GTX works hard and offers a good range of features, including the ability to connect to your smartphone and share notifications with you when they come in. It will even help you to find your phone if you ever misplace it!

There are fourteen different fitness workouts that will help you track your runs, swims, bike rides and many more. You can also expect to get information on the state of your heart health, and it will also count your steps, making it a great choice for anyone that wants to understand their fitness better than before.

Away from the fitness features, you can expect to see a torch, time, calls and notifications, stopwatch and even a weather app that you can use wherever you are. However, updating information is purely limited to Bluetooth as there is no WiFi available, nor is there a GPS option to plot where you have been.

Is the Mobvoi TicWatch GTX Good Value for Money?

One of the best things about this watch is that it is really good value and comes in under £55. The reason that it is so cheap is that it does not attempt to contend with the big-name brands but focuses more on offering some great features that will not break the bank!

However, with a low budget does come the need to compromise, and there are areas of this device that could have done with an upgrade. Yes, it offers good fitness tracking, but the addition of GPS would have been better, and yes, it connects via Bluetooth but adding WiFi would have made it more accessible. In reality, if you are looking for a watch that does it all, then this device probably won’t impress you as much as you hoped, but if you want a budget option then it may be just right!

How Long Does the Mobvoi TicWatch GTX Battery Life Last?

When you consider that this watch comes in at such a low price point, you would forgive it for not offering a good battery life. However, instead of opting for a poor battery, Mobvoi installed a battery that comes with around ten days of use in Power Saver mode and seven days of regular use.

The reason the battery is able to last so long is that the operating system is not a highly demanding system, and the tech parts inside the watch also do not need a lot of power to function. This makes it a great watch for everyday use, and you will only need to remember to plug it in every seven days or so!

Pros and Cons of the Mobvoi TicWatch GTX

When it comes to deciding whether to buy a watch or not, you should always consider all the pros and cons before purchasing. To help, we have listed the most significant pros and cons to owning this watch below.

Should I Buy the Mobvoi TicWatch GTX?

If you are looking for a budget watch that provides excellent battery life and a range of apps that help you through the day, then the Mobvoi TicWatch GTX may be the perfect choice! It may not have GPS, WiFi or big brand operating system but what it lacks in these areas it makes up for in price! Give it a try, and we are sure that you will be impressed with how much you can get for your money. 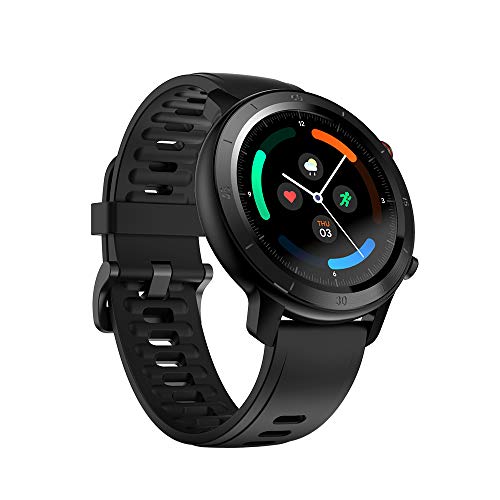 If you are looking for something top of the range then take a look at our Apple Watch 6 review.

A top of the line copywriter with more than a decade of writing experience with many high-end clients. Lots of experience and interest in writing about technology.

Currently living a rural life in South Yorkshire, and devoted to work.

One of the engineers, Mr Ibe, over at Casio set himself a goal to create a shock and water-resistant watch. He worked on it and made many, many samples. Eventually, this led us to the G-Shock.

It wasn’t long before G-Shock became the most famous brand for rugged and durable watches. They have exceptional levels of resistance to water, shock, vibration, low temperatures, impact and even vibration and gravity.

The movements and components inside the watches are specially protected by advanced technology and materials.

Another factor that keeps G-Shock popular is the range of designs they come in. You can get square, round or hexagon-shaped. You can choose from analogue, digital or both. Either way, the style remains fresh.

G-Shock timepieces were initially designed for the military and extreme outdoor adventurers. They walk the walk.

Maybe you think a G-Shock will be expensive, given their functions and features? You’d be wrong. G-Shock is like the jackpot of watches. They offer basic models of their classic watches for under $50.

The higher-end models have solar power and Bluetooth options, but, they aim to make their watches worth every penny.

Casio managed to get durability, toughness and affordable tech rolled into their watches.

What about the Baby-G?

The Baby-G is the women’s version of a G-Shock. They resemble one another a fair bit. The first version came out in the 90s as a sign of boldness.

It has the same functionality as a G-Shock in terms of its resistance. It also has alarms, a countdown timer, a stopwatch and an hourly chime.

Baby-Gs are equally known for being hard-wearing and hold onto their value.

Let’s have a look at the main differences between the G-Shock and Baby-G watches.

The most obvious difference is size. The G-Shock is aimed at men and the Baby-G is made for women with smaller wrists.

The straps differ in size, as do the face sizes. The G-Shock tends to have a thicker case.

G-Shock watches come in a variety of colours but you’ll most often find black, white, silver, blue, white, grey and maybe red. You can find the rest of the rainbow, though.

Baby-G watches tend to offer more colour variation so if you want something vibrant, you’ll likely be able to find just what you’re after.

Water-resistance is pretty standard when it comes to today’s G-Shocks and the rating tends to be 200m.

Baby-G, however, only offers 100m as standard. So don’t make any plans to go diving in your Baby-G. Stick to a swim.

They’re both rugged and reliable. They also share a few features:

Let’s look at one each: 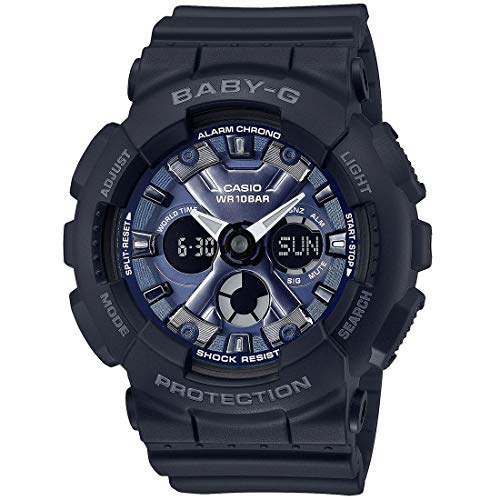 This is an analogue Baby-G. It’s one of the best-selling of the whole range. It makes a bold first impression in white with rose gold accents and skeletal dial.

This model isn’t just good-looking, it offers durability too. It has water-resistance to 100m and shock-resistance.

It’s a versatile watch packed full of functions which make it perfect for travelling. It knows the time in 29 places including 48 major cities. It has an accurate stopwatch to one-one hundredth of a second, a countdown timer, both 12 and 24 hour time formats and an automatic calendar until 2099. You might also make good use of the alarms. There’s an LED backlight so you can read it in low light.

The watch itself comes with a resin band which is adjustable. Although it’s been noted that Baby-G watches are made for women and are therefore smaller than the G-Shock, that’s not to say they’re small generally. The case is a whopping 43mm. 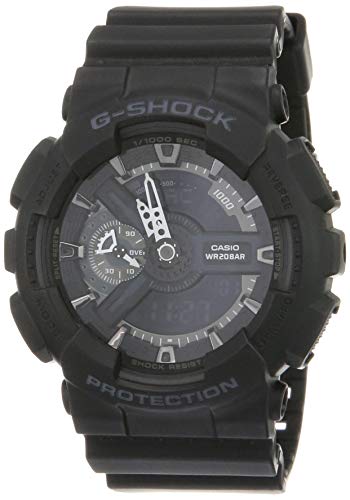 This watch is another statement piece. Contrasting its white sibling, this matte black finish is equally striking with golden accents.

Again, it’s shock and water-resistant, but you can get 200m out of this one.

It also offers magnetic-resistance which makes it a little more durable and robust.

The list of functions reads the same as the above, except it knows one more time zone and has a speed indicator. The LED backlight has an afterglow, too.

It also has a resin band and this is really resistant to excessive wearing. It holds fast, even when you get sweaty.

How do they compare?

Both the G-Shock and Baby-G have similar features:

The major differences are: 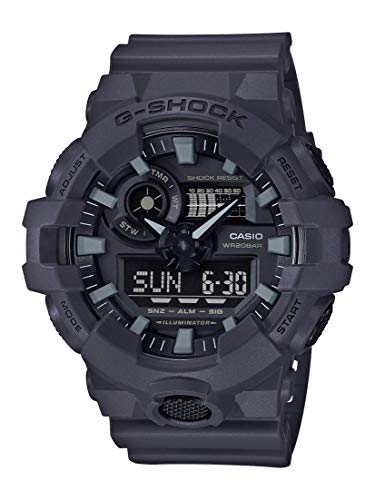 The reality is, you don’t have to choose between the two. All it depends on is what your requirements are and go for the one that suits those the best!If you’re interested in learning more about rugged watches, you should read our article on what to look for in a good one here.