If you have a youngster or adolescent who is not really ready for a full-fledged smartphone, the Xplora X5 Play is the perfect solution.

The Xplora X5 Play is a smartphone that doubles as a GPS watch. It does not, however, have any social networking features. It also allows parents and guardians to have complete control over who their youngster communicates with.

Parents may add contacts to the app, and no one may call or text the child unless they are on the contacts list.

Little ones can phone up to 50 pre-approved contacts and receive calls from them. However, if someone who isn’t on that list attempts to contact the watch, they will simply be disconnected. Similarly, any SMS sent to the watch from unknown numbers (not allowed contacts) is not received. Also, the youngster is unable to call or text random numbers.

The ability to track a child’s whereabouts is another fantastic feature of the X5 Play.

Note, you will need to put a nano-SIM into the watch. 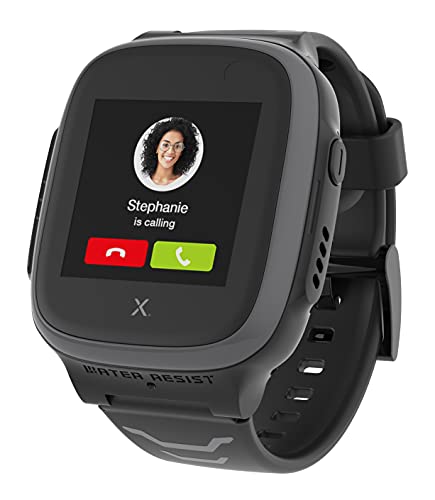 The Xplora app for iOS and Android, which parents install on their smartphone, allows you to view information at any time.

GPS is a pretty much non-negotiable trait on a kid’s smartwatch. It keeps track of the child’s movements and provides an extremely accurate GPS location. It also includes a map that shows where the child went during the day.

The option for parents to contact and message their children via the watch is certainly a huge plus for them. They also mention in reviews how amazed they are with the watch’s accurate GPS technology.

The Xplora X5 Play may also be used as a fitness tracker. And anything that encourages kids to be more active is a good thing.

Through the Xplora Goplay platform, the watch tracks steps and allows youngsters to collect prizes. A youngster receives an Xcoin for every 1,000 steps they take. These may be kept and then traded in for prizes at the Goplay shop. It’s worth noting that some of the Goplay store’s rewards are fantastic.

Onboard storage on the XPlay 5 is a whopping 4GB. Your youngster will be able to shoot and store images and videos using this device.

They’ll especially like being able to send films and selfies shot with the 2MP camera to family members on their approved contacts list. To get these messages, those family members must first download the Xplora app.

Tech-savvy youngsters will appreciate the ability to alter the display to an image from their personal gallery.

A timer, an alarm function, and a music player are all features they’ll like. Sending a small mp3 file in a message is, incidentally, the only way to download music to the watch. There isn’t a single link to a streaming service or even an app store.

Your child may send messages using a selection of pre-programmed texts. One disadvantage is that emojis may only be sent independently from text messages. The emoji selection is also limited. We all know how much children adore them.

The voice message tool has a 15-second time restriction, which may seem restrictive, but evaluations indicate that youngsters use it frequently.

The watch’s speaker and microphone are both adequate. On calls, you can always hear your child well, and the kids appear to like the volume and sharpness of their parents’ voices on the watch speaker.

The watch has a 1.4-inch display, which is likely too big for most children’s wrists. Of course, it is dependent on the individual’s age. If you’re purchasing for a much younger child, keep this in mind.

There are 3 color options to choose from. Pink, pastel blue, and dark grey. All versions, however, have black straps and cases.

It’s worth mentioning that the watch is waterproof and dustproof, with an IP68 rating. As a result, it has a high level of durability, which is critical.

It also features a School Mode that turns down calls, messages, and alerts during school hours but leaves the emergency mode on.

The battery lasts for up to 72 hours.

It’s a little pricey for a kids’ smartwatch at around $170. But you do get an abundance of features. Plus, peace of mind about their safety.

If it had a few more functions and a more compact and colorful appearance, I think this is a fantastic idea that more parents and children would appreciate. Maybe a more family-friendly price tag as well. But if you have the funds, this isn’t a problem!

Don’t leave now! We have a great list of the 10 best kids smartwatches and the best kids fitness trackers for those aged 8+

The Garmin Fenix 7 is due to be released imminently. Naturally, there is a wide range of rumours circulating about what we can expect. If you are as excited as we are about it, … END_OF_DOCUMENT_TOKEN_TO_BE_REPLACED

There's no doubt that Garmin is one of the best smartwatch manufacturers in the world. However, the Garmin Vivoactive 4 was released in 2019, and we think that it's absolutely time … END_OF_DOCUMENT_TOKEN_TO_BE_REPLACED

In the tech sector, it’s fair to say that smartwatches are fairly hot property. So there are lots of upcoming and new smartwatches in 2021 that you might be interested … END_OF_DOCUMENT_TOKEN_TO_BE_REPLACED

When Mobvoi delivered the TicWatch GTH to China at the beginning of the year, it wasn't expected to release so soon! However, the TicWatch E3 is likely to be unveiled soon, and … END_OF_DOCUMENT_TOKEN_TO_BE_REPLACED

If you are a fan of Samsung watches, you've heard about the upcoming Samsung Galaxy Watch 4. There is currently no official release date, cost, or features list, so we will share … END_OF_DOCUMENT_TOKEN_TO_BE_REPLACED