The Fitbit Ace 3 is a wearable gadget made exclusively for kids. It has a minimum age recommendation of 6 years old. Compared to the previous version, it has a brighter display and longer battery life (8 days against 5). Also, a pool (and bath) friendly 50m water resistance, it’s more adaptable than the previous edition.

Dark blue with green accents or black with red accents is the two colour schemes available. The monochromatic PMOLED display has various watch faces to choose from, guaranteeing no two Aces are identical.

So as the Fitbit Ace 3 is meant for kids, it doesn’t monitor all the metrics an adult tracker can. Including calories burnt. Children above 13 can track their activities if they create a standard Fitbit account, which they cannot do if they are under the age of 13. 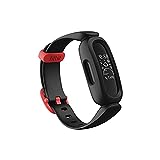 The Ace 3 monitors sleep quality and stages, steps, exercise duration, and active minutes in younger children. The latter employs several sensors to track the number of activities. This includes jumping, trampolining, and sports, in addition to standard step counting. There is no way to trace your location using GPS.

Create activity objectives that provide rewards for achieving a step goal or active minutes. Plus, the Fitbit app has a Kid View that allows kids to see their numbers but not the whole family’s data.

The Fitbit Ace 3 is devoid of flashy features like cartoon and movie themes. Though we feel is a plus since it does not look like a typical child’s product. The Ace 3 is stylish, comfortable, and durable enough to handle even the most thrilling journeys.

Notably, the Garmin Vivofit Jr 3 costs around the same. 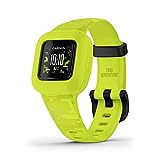 The Fitbit Ace 3 device itself is a small, rectangular pebble with a silicone band. So it protects it from bumps and lumps, just like its predecessor. The Ace 3 has a rounded look that makes it look more current than the Ace 2. It comes in two colours and has an adjustable plastic clasp: dark blue with a green buckle and black with a red buckle. Separate coloured bands are available for purchase.

Unlike many children’s watches, the silicone band is pleasant and easy to change and won’t hurt younger delicate skin. Other children’s watches can produce a rash if worn nightly, but the Fitbit won’t cause any irritation after a month of usage.

The Ace 3’s display is a monochrome OLED touchscreen with a backlight. Also, it comes with a variety of clock faces available through the Fitbit app. The Fitbit Ace 3 lasts 3 days more between charges than the previous version, which is nice.

The device may be used by squeezing the borders or sliding the touchscreen to toggle between the clock face, step counter, sleep monitor, timers, and features like ‘do not disturb.’

The internal battery is charged using a special USB port on the Ace’s back. Once a week, at the absolute least, you should charge your Fitbit. The official battery life is eight days, although we regularly got eight or nine days after a frantic first week in which constant step-checking depleted the battery in less than seven days.

The Fitbit Ace 3 offers several unique features that will appeal to kids, such as watch faces that only illuminate when you walk. You can also display today’s activities on the main time screen, depending on the watch face, and if you set up competitions in the app, the Ace can notify them when they’re approaching their goal. If your child has their own phone, you may set up the Ace to get call and message notifications.

One of the Ace 3’s main selling features is that the monitoring does not stop when sleeping. It also records sleep and allows you to set a reminder, which might make putting the kids to bed on time a little easier. You may also use an alarm clock to wake them up.

The screen on the Fitbit Ace 3 is noticeably brighter, making it easier to see in broad sunlight, and it’s simple for your child to check their activity metrics without having to open the Fitbit app, though they can do so there as well.

The Fitbit Ace 3 does not monitor calories because it is intended exclusively for kids. Instead, it counts active minutes, including step counting and time spent performing other physical activities like jumping, trampolining, skipping, or playing racquet sports. Older testers may fake their activity count by sitting on the couch and flailing their arms around.

Fitbit allows you to create inactivity warnings, countdown clocks, and use the device as a stopwatch in addition to fitness tracking. The option to establish family goals on the Fitbit app is particularly useful. Mainly as it allows you to mock one another, email support, and challenge one another to fitness challenges, it’s the whole shebang. 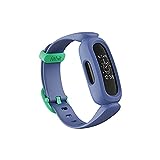 Although the Fitbit Ace 3 is meant for kids, it uses the normal Fitbit app with some features blocked, such as joining the Fitbit community and seeing how many calories they’ve burnt. What’s left is an app that was plainly developed for adults and adapted for children.

Setting up a Fitbit for a child is not the same as setting one up for oneself. To add your children – or, at the absolute least, your children under the age of 13 – you must first register a Family Account. You cannot establish a kid account for anyone 13 or older, although the creation method does not make this evident. Before joining your Fitbit family, if your child is 13 or older, they need to create their own Fitbit account.

Additional software features like calorie monitoring, menstrual health tracking, and Fitbit community access are available with standard accounts. On or after their 13th birthday, children who are close to 13 will be eligible to upgrade their account to a standard account.

The Fitbit app is excellent. However, Kid View was clearly not intended with tiny children in mind. It’s advised to pair the Ace with the parent’s phone. That way, you can track their progress in the app. Though this also has some limitations, they’ll need to use your phone to check their data or change the face.

You can’t connect an Ace 3 to the Fitbit app on different devices without using parental login credentials and then switching to Kid View, so think about which device you want your child to use before you start.

If you want your kids’ tracker to be rugged, get it.

The silicone band that wraps around the Fitbit Ace 3 to protect the touchscreen and should last a long period of time protects the gadget from bumps and lumps. For optimal comfort, the silicone band may be easily adjusted.

It looks nice and isn’t too silly that it would embarrass older children.

If you want more smart features, don’t purchase it. The Fitbit Ace 3 is a fitness tracker, not a smartwatch, and it isn’t meant to be a one-stop entertainment hub.

You’ll miss out on heart-rate monitoring. The HR sensors on the Ace 3 detect activity but do not store heart rates. This might change in the future.

If you’d like to know more smartwatch options for kids, we’ve got 10 of the best for you!