The original Amazfit T-Rex was launched in 2020 and was an excellent value for money sports watch. The chunky watch packed many features to keep the most enthusiastic fitness fans happy, and the rugged design was ideal for outdoor adventurers.

In March of 2021, news broke by 91mobiles that Huami was getting ready to launch the Amazfit T-Rex Pro after having the design and specs leaked to them. And, a year later, we have it here!

There are few smartwatches with 10ATM water resistance, but Amazfit T-Rex Pro has more than 100 fitness modes and an extremely durable design.

While it may be purchased directly from Amazfit in the US, it is also available at Argos in the UK and Amazon, globally.

There are three colours to choose from: Meteorite Black, Desert Green, and Steel Blue for the original release.

In terms of design, the T-Rex Pro is nearly identical to the original T-Rex model. For a practical, industrial, and slightly plasticky style, this updated version features four screws in the bezel, as well.

While jogging or wearing gloves, you may simply press the four metal buttons (mode, back, up and down) on the edge of the casing. Accidental pushes are all too often because of how readily they may be made.

In spite of the T-Rex Pro’s 13.5mm thickness and 47.7mm diameter, the polycarbonate watch doesn’t feel heavy on the wrist because of its light 59.4g weight.

Aside from the fact that it’s waterproof to 100 metres, Zepp claims that the T-Rex Pro is shock-resistant, can survive temperatures between -40°C and 70°C, and is capable of coping with salt spray. That’s double the capacity of the previous edition.

An AMOLED touchscreen displays 360×360 pixels on the T-Rex Pro, which is powered by an Intel Atom Z2560 processor (again, just like its forbear). Even in direct sunshine, you can see it if you turn up the brightness all the way. Zepp estimates a battery life of 18 days, so that’s obviously an issue. With its 390mAh battery, you should expect it to last for around a week in real-world use.

With a 22mm-wide silicone rubber wrist band included, you can run with confidence. Another device included in the package is a magnetic charger that connects to the case rear. Zepp’s new-for-2021 Bio-Tracking 2 PPG optical sensor, which monitors heart rate and SpO2, has its flashing LEDs there (oxygen saturation). A gyroscope, accelerometer, altimeter, geomagnetic sensor, and ambient light sensor are also included.

A data-gathering beast, to put it plainly.

Out of the box: Amazfit T-Rex Pro

It’s a fitness watch, but it also includes certain smartwatch-like capabilities, such as notifications and the ability to take calls. However, despite the manufacturer’s promise that it is the ‘ultimate personal assistant,’ it may be programmed to haptically vibrate for incoming texts and calls. You may also use it to make some simple adjustments to the music playing on your phone.

Using Bluetooth, you can obtain weather forecasts, dawn and sunset times, and the current moon phase when you connect it to a smartphone.

The T-Rex Pro’s tempered glass touchscreen is sensitive enough for usage on the go, making it a joy to use. Switch between the watch face and shortcut control panel with small swipes up and down. From turning on the flashlight (which isn’t bright enough for any practical use!) and engaging power-saving/do-not-disturb modes to selecting a screensaver and changing the screen’s brightness. Also, the display may be ‘always-on’ at designated periods.

In spite of Zepp’s claims, we found that the T-Rex Pro has an 18-day battery life only provided you don’t conduct any physical activity. You should anticipate the T-Rex Pro to last roughly a week if you track your workouts for an hour a day. T-Rex Pro may be customised to emit a haptic buzz every mile you run or to set the display to maximum brightness and “always-on” for a slight reduction in power consumption (though it does need to be on maximum brightness to be read easily during strong sunlight). 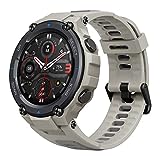 It’s hard to argue that the T-Rex Pro is too equipped for the price it commands. GPS and heart rate tracking are perhaps the most significant features for daily usage, and both performed perfectly throughout our two-week test. During rest, it monitors your heart rate every 10 minutes and continuously during physical activity. When it comes to satellite-based GPS tracking, we found it to be flawless in our tests.

As a result, you’ll be able to see at a glance how much time has passed, how many calories you’ve burnt, and even how fast you’re going, as well as how much elevation you’ve climbed and how many heart rate zones you’ve entered. A suggested recuperation period is provided by the T-Rex Pro after each run.

Amazfit advertises that “the maximum oxygen consumption is also displayed on-screen”. Huh? This refers to one millilitre of oxygen per kilogramme of bodyweight being the maximum quantity one may consume in a minute. So what’s the point of this? Its data on Aerobic Training Effect, Anaerobic Training Effect, and Training Load, which will also be of little use to the majority of individuals, is similarly meaningless to most.

Even if you’re trekking at a high altitude and are concerned about altitude sickness, we consider SpO2 (oxygen saturation) levels a novelty. Here, there’s a lot of data, but not enough analysis and goal-setting/virtual coaching.

In order to track your activity, you may use the T-Rex Pro’s built-in auto-detection feature or manually select an activity from the list by pressing the mode button and swiping down (to name just a few of the 24 options available – though you can manually add more).

The companion app for the Amazfit T-Rex Pro

When you finish an activity and bring the T-Rex Pro close to your smartphone, it automatically syncs with the brand’s free Zepp app. For example, your current heart rate and step count are clearly shown as well as your SpO2 levels as well as your prior training records.

However, we were let down by the app’s ‘my goals’ area, which consists just of a daily step goal, weight goal, calorie burn goal, and sleep goal target. If anything, it’s a little too simple given how esoteric the data it seems to collect.

Personal Activity Intelligence (PAI) points are granted like in other similar gadgets and apps in an attempt to simplify and ‘gamify’ the experience. While it’s admirable that the day’s physical exertion may be represented by a single number, a “congratulations, you just passed 30 PAI!” message has little practical utility. Ignore it yet another time.

The T-Rex Pro captures a lot of data, but it doesn’t do anything with it. It won’t help you improve your running speed. It has a ‘virtual rabbit’ option that allows you to race against your prior exercise time, but it doesn’t tell you if you’re falling behind.

However, the T-Rex Pro doesn’t work with third-party applications like Strava, MyFitnessPal and RunKeeper, which means that you can’t use it to augment the data you’re currently gathering from a fitness tracking app like these.

Run, hike, and go skiing or swimming are all on your to-do list now that you’ve gotten into shape. Ideally, you’d now like to start documenting your travels, gathering information such as your heart rate and, if you’re going to be hiking at high altitudes, your SpO2 levels. The T-Rex Pro from Amazfit may not look like much, but it’s capable of everything else.

It has more than 100 sports modes, ranging from jogging and hiking to snowboarding, rock climbing, and cross-country skiing. While it doesn’t have a compass, it does have a GPS, so you can track your route. It’s also 100-foot-waterproof. It has a 1.3-inch AMOLED display, yet it has a battery life that can last for up to 18 days.

That’s quite an accomplishment for such a low price, but is it a smartwatch or a fitness tracker? In addition to receiving alerts from your smartphone and controlling music over Bluetooth 5.0, this device is also capable of doing both at the same time Even the watch faces may be changed. With the T-Rex Pro, you’ll also have the ability to see how well you slept during the night.

The T-Rex Pro has a lot going for it, but why are we not completely sold? Zepp Health’s T-Rex Pro captures a tonne of data, but what does it do with it? Except for the ability to share your most recent exercise on social media, there isn’t much more you can do with the data on the Zepp app. Those who track their activity and/or diet using smartphone applications like Strava or MyFitnessPal will have to do so in two separate silos. As if that weren’t bad enough, it just feels like a stumbling block in the first place.

In terms of durable sports watches, it’s difficult to find a better deal that covers all the essentials for a variety of outdoor activities. That so, we aren’t certain T-Rex Pro is liberal enough with its data to be called top in the industry.

Read our review of the original Amazfit T-Rex here.