The Apple Watch SE was revealed this week along with the Apple Watch 6. It’s been marketed as the more accessible Apple Watch and it really is. People should not be fooled into thinking it is a cheap version.

It’s stripped back, but it’s got a powerful punch. If you compared the SE to an Apple Watch Series 3, you’d see that you get a superior model for your money.

With that, people are referring to the SE as the successor of the Apple Watch 3 and that’s a fair assessment. The Series 3 is not being reduced in price and is still available around $264.

The Apple Watch SE is by no means ‘cheap’. It’s less than a Galaxy Watch 3, granted, but it lines up with the eagerly anticipated Fitbit Versa 3, Oppo Watch and Huawei Watch GT2.

Here’s everything you’ll want to know about the new Apple Watch SE.

The design is the same as the Apple Watch Series 6, but doesn’t come in as many options. It got its shape from the Series 4, although naturally Apple have made some minor changes and the SE is incredibly sleek. You get the same dimensions and display (including the resolution) as the Series 6, so you can trust you’re getting a quality visual experience.

It comes in the standard 40mm and 44mm sizing.

It will come in an LTE version. This will not only be capable of making phone calls, but thanks to the latest WearOS 7 on board, allows users to enjoy the new Family Setup feature. This makes the SE a great smartwatch for families with kids or elderly relatives. The user can pair a Watch with an iPhone. Meaning, you can limit the use of the watch for kids (things like only sending messages to trusted contacts or selected app downloads). Best of all, no one will get lost by using the location tracking features. Safety is paramount!

For a fuller comparison between the two- read here. The SE doesn’t come with the newer S6 chip, and that’s the compromise you make. There’s an S5 chip inside but it’s still twice as fast as the Series 3. You’ll need this as Apple’s apps continue to improve.

You shouldn’t expect the ECG and blood oxygen sensors, so the SE is more a smartwatch than fitness and health tracker.

You don’t get an always-on display, so you still need to flick your wrist to see your notifications or the time.

Don’t fear, it’s not all cut-backs; you get access to new features.

SE and Series 6 users can both enjoy the accurate accelerometer and altimeter as well as noise monitoring, fall detection and improved emergency SOS features. See a comparison of all the Apple Watch models here. 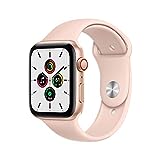