Have you seen the Casio G-Shock GA-2100 watch? When considering digital watches, one of your first thoughts will likely be G-Shock. The Casio-owned company has been in business for a few decades, and many people are familiar with its design style. The casings on G-Shocks are bulky and rugged, giving us confidence the watch will not sustain damage from big impact. 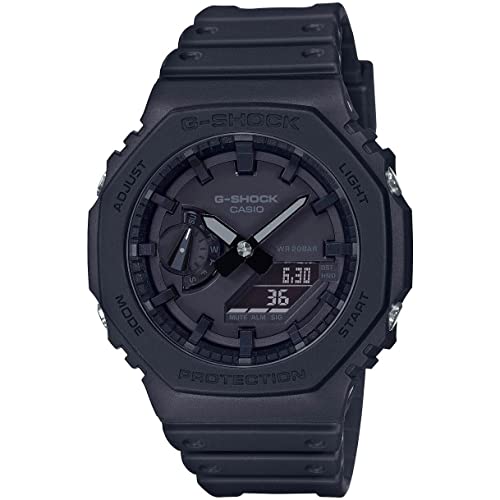 The GA-2100 retains a lot from the original G-Shock than other current models such as the GA-2000. It has a more muted look, appealing to a wider audience. It’ll be instantly recognizable to G-Shock fans, but it won’t shout “G-Shock” to others.

The watch’s bezel has a striking similarity to the Audemars Piguet Royal Oak, giving it the moniker “CasiOak.” Although I don’t believe that link is a deliberate selling factor for most consumers, the GA 2100’s design does give it a classic appearance.

The GA-2100’s appearance draws a great deal of worldwide attention. This gives it more exposure in watch markets than other Casio G-Shock versions. This version, the G-Shock GA-2100 has an eye-catching bezel and is thinner and less intrusive than those seen on previous Casio watches. The watch now has a more conservative appearance, but the case and strap maintain distinctive G-Shock features. The GA-2100’s dial has a polished design that isn’t too crowded to make it both modern and timeless. It has a more refined appearance than previous analog-digital G-Shock versions in the same price bracket.

The GA-2100 is the skinniest G-Shock of all the latest versions, thanks to the adoption of the Carbon Core Guard construction.

The watch is mid-size in height and width, rather than the enormous size of typical analog G-Shock watches, and it is light and comfortable to wear. At 51g, the GA-2100 is presently the smallest analog-digital G-Shock model. (Also IN the G-Shock range overall, behind only the GW-S5600-1JF (Japan-only) and the GMD-S6900 for women.) 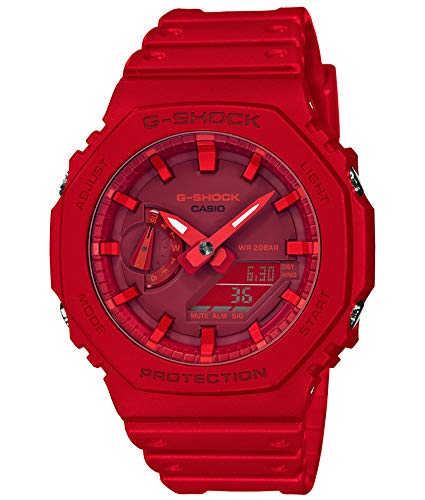 Those with narrower wrists don’t even think about the watch not fitting properly or seeming overly wide, which is a common issue with bigger G-Shock watches. Even though the display is bigger than the DW-5600, it wears similarly. It’s really an analog-digital version of the earlier DW-5600 with a few more functions.

The Casio GA-2100 is a stunning watch with an affordable price tag of about $100. Buying a GA-2100, whether as everyday wear or for weekends and leisure, is within most people’s budgets and does not demand a significant financial sacrifice. 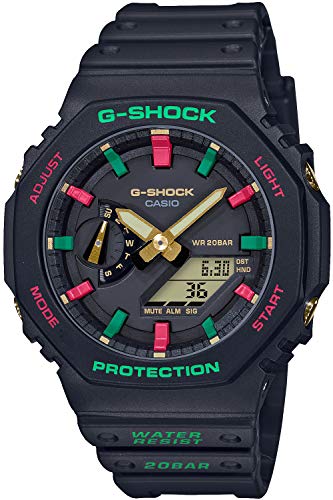 Although the GA-2100 might persuade individuals who would not normally buy a G-Shock to do so, it doesn’t mean they won’t appreciate the characteristics that G-Shock is known for.

It outperforms its rivals because of its heavy-duty shock resistance and 200m water resistance and global time, date, and day display, 24-hour countdown timer, 1/100-second stopwatch, and dual-LED lighting.

Downsides of the Casio GA-2100

The GA-2100 isn’t ideal, and depending on your requirements, you may be better off with another G-Shock model. For one, it does not have an auto light feature that allows you to turn your wrist to activate the backlight. The LCD is extremely tiny, and individuals with vision problems or aging eyes may find it worthless.

Those who need a more legible LCD display might choose another G-Shock, but they will have to choose between an all-digital or a bigger analog-digital model. Realistically, it’s a great everyday watch, if only to tell the time. If you like G-Shock, you could start a collection and use another model to utilize the digital features.

There things that the GA100 lacks that customers will most likely be searching for. Unfortunately, it lacks both radio sync and Bluetooth, but it’s understandable considering the watch’s price.

With the CasiOak, you make a few sacrifices. It offers a long list of features, is robust and robust, has a 200m water resistance certification. Plus, it fits a wide range of wrist sizes comfortably. It’s one of the brand’s few models that may be used in a range of circumstances. This is the G-Shock to get if you don’t need radio sync or Bluetooth.

Why not check out the 10 best G-Shock watches the brand has to offer?