Alongside the recent release of the new Forerunner 55, we saw the Garmin Forerunner 945 LTE. Now, there are instances where its ability to seek assistance without using your phone might be useful.

This version watch is almost indistinguishable from the first version, except for the LTE function that allows you to reach out to the emergency services and your chosen SOS contacts with your position.

Also, it’ll send your real-time whereabouts to chosen individuals, which may be useful in happier situations, like when you’re competing in a race. During your run, pals may also give you inspiring SMS and voice messages.

So far, the Garmin Forerunner 945 LTE appears to be a really decent item for offering security. 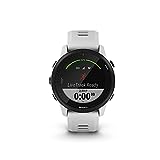 The Forerunner 945 LTE was released in black or white last week (early June) for just shy of $650. It’ll be accessible in the United States and Canada initially, with the rest of us following very soon.

Of course, there’s no point in getting the LTE model if you don’t intend to utilize it; this service is about $6 a month for a yearly subscription and $7 for a month-by-month subscription.

The Forerunner 945 LTE is essentially the same as the standard Forerunner 945. However, most of Garmin’s devices look the same, in fairness.

It has a round face with two right-hand buttons and three left-hand buttons. There’s no touchscreen, but again this is standard for Garmin running watches and not a downside. The 1.2-inch display has backlighting and transflective technology, which uses sunlight to brighten things up naturally. On the brightest of days, you should be able to see the screen.

Garmin strives to give users an experience that is as user-friendly as possible because everything is done through button clicks, but there is a learning curve.

Pressing and holding the backlight button down for approximately a second gives you a single menu screen with options including Do Not Disturb, LTE and sync.

Pressing and holding the left-hand center button when the display shows a widget, you’ll see a menu to alter that widget and keep scrolling down for general options.

Other Garmins have comparable safety measures, but they rely on a nearby smartphone to connect to the internet.

It’s easy to raise an alarm by pressing and holding the backlight button and wait for three beeps. This depends on the mode (Assistance/Assistance+); you can notify personal contacts or the commercial monitoring service.

Assistance Plus will inform Garmin’s International Emergency Response Coordination Center, contacting local authorities for you. It can only be engaged or disabled using the Garmin app on your phone. Until aid arrives, the IERCC representative will keep in contact through the Forerunner.

Unlike the Apple Watch’s Emergency SOS functionality (which employs both speech and text), the Forerunner 945 LTE does everything via text.

The 945 LTE, like any smartphone, can only seek assistance if you’re in an LTE coverage area. So, you’re not exactly untouchable. Remember that!

Apart from communicating with emergency services or friends through its LTE radio, there isn’t much more you can do with it: You can’t use the Apple Watch 6 LTE (or other LTE smartwatches) to send texts or make calls while you’re out and about, unlike the Apple Watch 5 LTE (or similar). You can’t listen to Spotify or download third-party apps, for example.

You may utilize LiveTrack to send automatic notifications about your time elapsed, pace, and speed of your previous lap if you only want somebody to know about your runs. These messages can be sent to up to 5 people. Though if you do know five people that are actively interested, you’ve got some great friends.

Those contacts may also send you both voice and text messages to encourage you while you’re running, which may be a great incentive.

The Forerunner 945 LTE is speedy and accurate right from the start. It takes less than 60 seconds to get a GPS signal on the first try.

Switch off the Assistance Plus and try a simulated run to test the safety features. Push the backlight button and hold for around 4 seconds. The watch will vibrate, begin a countdown for 5-seconds before sending a distress SMS to your chosen contact. That person can receive the SMS in a fraction of a second and answer through text.

You may choose one of three pre-programmed messages or create your own by using the keyboard on-screen. This can be cumbersome since it requires you to scroll to choose individual characters, and there’s no predictive spelling.

Utilizing the LTE signal will, of course, reduce battery life. When compared to the earlier Forerunner 945, lasting up to 10 hours with GPS and music, the Forerunner 945 LTE only lasts 7 hours with GPS, LTE, and music. GPS mode with just the music provides you roughly 12 hours of battery life, while GPS mode without music offers you up to 35 hours. 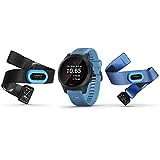 Many of Garmin’s fitness-focused timepieces contain smartwatch-like functions comparable to the Fitbit Sense. The Forerunner 945 LTE features Deezer, Spotify, and Amazon Music built-in music storage, NFC payments, and smartphone notifications.  ConnectIQ allows you to load extra watch faces and apps, but it’s nothing like what you experience with an Apple or WearOS smartwatch.

The Forerunner 945 LTE serves as a sad reminder, especially to women, that they must always take precautions. Now, the Forerunner 945 LTE can’t stop women from being harassed or worse. Still, it does provide some safety by allowing a runner to quickly contact a loved one or the appropriate emergency services if needed.

However, this security comes at a high cost. The Garmin Forerunner 945 LTE costs close to $650, plus $5 each month for the LTE connection.

If you’re keen to know more about what Garmin has to offer, you should head to our comparison article.