[lmt-post-modified-info] The Xiaomi Mi Band was launched on June 11th 2020. In terms of design, it is quite similar to the Mi Band 5 but with a slightly bigger screen size at 1.1″ and a wealth of new features.

You can watch our unboxing video of the new Mi Band 5 below.

New features to include:

The Mi Band 5 could be able to listen to your requests and respond with Alexa actions in multiple languages. But, it will only be able to reply in text. Meaning, no Alexa voice. This is because the band currently lacks a speaker unless that feature will funnel through your phone.

Another feature is the ability to track the menstrual cycle. The Mi Band 5 is also able to offer breath training. Additionally, another nice feature is the remote control for your camera (on smartphones).

Tracking your blood oxygen level is a plus when doing a physical activity or for health monitoring. Additionally, it could also help monitor your sleep and help with identifying problems. But, it’s not a medical device but can be used for non-medical monitoring. Also, this feature is currently not supported in the global version.

So what else is new with the Mi Band 5 (Global version)?

Here, we will take a more detailed of the Xiaomi Mi Band 5. Read more below for our in-depth analysis of the new and upcoming smartwatch from Xiaomi.

So who is Huami?

Founded in 2014, Huami is a Chinese company based in Beijing. It’s the largest wearable device company in the world, ahead of Fitbit and Apple. To date, it has the number one market share in locations such as Indonesia, Italy, Spain and India.

It aims to provide fashionable activity trackers at affordable prices to help promote a more active lifestyle. Huami markets a number of trackers under the Amazfit brand name. Also, they are also the exclusive provider to Xiaomi of wearable technology. In collaboration with Xiaomi, it makes the Mi Band.

The company is headquartered in Beijing and Mountain View, California USA.

If you’re interested in how Xiaomi stacks up against another well-known brand, we compared it against Fitbit in our article, here.

For reference, the Mi Band 4 was announced and then launched in June 2019 whilst the previous model the Mi Band 3 entered the marketplace in May 2018, so it is reasonable to assume that a similar timeframe will surround the launch of the Mi Band 5.

Released shortly after the Mi Band 3 the Xiaomi Hey+ had very similar specs. Besides the screen size, there isn’t much difference in the spec. The same thing happened again when the Mi Band 4 was released in the middle of 2019. It is no surprise therefore that the Mi Band 5 is very similar in terms of design to its predecessor – the Mi Band 4.

It is worth noting that there are actually no significant changes in the new Hey+ 1S when it is compared to the design and features of the Mi Band 4. What is noticeable, however, is that the display has had a a design tweak in order to offer users a screen that is a little more rectangular in shape and that features more rounded corners.

The Mi Band 5 looks almost identical to the Mi Band 4 apart from the slight increase in size. No doubt it offers better colors and much more functionality for nearly the same price.

What can we expect in term of new features to come?

It has already been indicated that Huami and Xiaomi will continue to work together on new products and that any long-term plans that both companies have for the Mi Band product line will remain unchanged.

Huami has, however, suggested that it is looking forward to producing and developing future generations of the Mi Band as well as also targeting different segments of the global market and even different customer profiles to their current ones.

All previous Mi Band models have offered NFC functionality. However, support was limited to China only, so there’s a good chance that this will continue to be the situation as is apparent.

Features for the Xiaomi Mi Band 4 included a microphone as well, but this feature together with the NFC capability were not available in the global variant of the tracker that the company launched.

What is the Price of the Mi Band 5?

Current price is about $35 This is an amazing price based on the value and wealth of competitive features it gives. 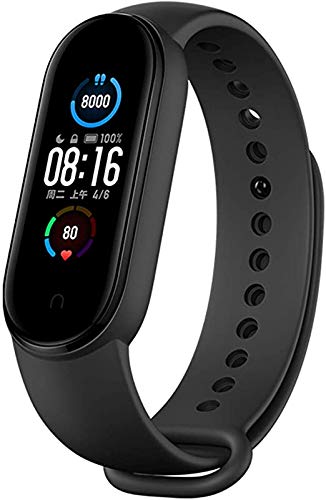