Rather than using cutting-edge technology, Fossil’s smartwatches feature elegant design and a robust Wear OS platform. Although it is a relatively inexpensive watch, the new Fossil Gen 6 comes with a few unique features: the Snapdragon Wear 4100 Plus processor as well as Wear OS 3, a version of Google’s wearable OS that will integrate Samsung’s Tizen OS.

Even though they are the most noticeable upgrades over the Gen 5, the layout remains virtually unchanged. The new Fossil Gen 6 smartwatch has a bezel ridge and significant pusher and crown buttons – if the previous one seemed a little too smooth. The design still seems elegant, even though it isn’t a massive departure from the previous model.

What truly makes the watch unique is its internal upgrades. Fossil says the new Gen 6 watch will have 30 percent faster performance than the Gen 5 due to its 1GB RAM and 8GB storage, as well as a Snapdragon Wear 4100 Plus processor. Despite very few changes from the previous model, the AMOLED display on the Fossil Gen 6 remains excellent.

In addition to the SpO2 sensors used for monitoring blood oxygen levels, the new Fossil Gen 6 has an improved heart rate sensor for periodic monitoring. The Google Fit apps are the only ones that can track your health and fitness because there isn’t much in the way of third-party apps.

We’re not convinced the Fossil Gen 6 can keep up with the like of the Samsung Galaxy Watch 4, owing to battery issues and a price that rivals the best non-Apple models.

The ordinary version with basic watch bands, such as silicone and leather, costs $300, while a variant with a stainless steel watch band costs just slightly more (about $20). The Fossil Gen 6’s watchbands are 18mm wide, so they will not fit on the new Samsung Galaxy Watch 4 or Apple Watch 7 20mm bands – if you’re lucky enough to have a collection. 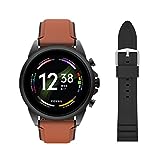 It features a black case, a stainless steel round dial, a black flexible plastic strap, a crown on the right side accompanied by two pushers on either side, and a pusher on the right side flanked by two pushers on either side. Several differences separate the Gen 5 from the new device, so it’s not identical, but you would only notice them if you looked closely.

Compared to the smooth edges of the Fossil Gen 5, the bezel’s ridge is more pleasing to the eye – and, no, it does not rotate like the Samsung Galaxy Watch 4 Classic, so it is more of an aesthetic feature that you may or may not find appealing.

Two lugs flank the crown, which should help it catch less on sleeves or pockets. The crown appears somewhat flat and broader. You can still click on the crown to access your apps, and the crown rotates with just enough resistance to prevent you from accidentally rotating it. It’s easier to push the pusher buttons on each side of the crown compared to previous models because they have broader ends. The result is an industrial-looking watch.

In the same way as its predecessors, the black case is adorned with large lugs that hold the watch bands and a pair of sensors flush with the bottom of the body. Although the watch is styled well, it is weightier than other smartwatches (like the Galaxy Watch Active 2) or those with balanced weight distribution (like the Apple Watch 7).

There is no change to the Fossil Gen 6’s 1.28-inch AMOLED display, but it still looks great. Its 416 * 416 resolution and 328 pixels per inch density displays crisp images and graphics.

Despite not being a fitness smartwatch, you can wear it on runs and while exercising. There is a heart rate monitor and a blood oxygen monitor on the Cardiogram app’s home screen, as well as a fitness tile that just asks whether you are inside or outside without any actual activity tracking.

In light of this, most users will most likely utilize the Google Fit suite of applications, which comes preinstalled for fitness and other health monitoring. Fit Workout, for instance, tracks different types of workouts in addition to sleep, fitness goals, and meditative breathing measures.

The Gen 6 is fine to wear during workouts since the watch’s design, and buttons aren’t overly bulky. It’s also not too heavy to get in the way when exercising. However, during strenuous exercises, a slimmer fitness watch, such as the older Samsung Galaxy Watch Active 2 or the current Fitbit Sense, may be more comfortable on the wrist.

Compare prices and choose your favorite supplier from this list:

On a smartwatch that isn’t an Apple product, the Fossil Gen 6 features some of the best specifications we’ve seen. This processor is equipped with 1GB of RAM and 8GB of internal storage for applications and data.

The watch is lightning fast with such specifications, switching between apps and screens without causing any lag. Inputs occur instantly, and transitions are seamless. A new Wear OS 3 will be available in 2022, but in the meantime, we’ll have to use (the barely altered in years) Wear OS 2. 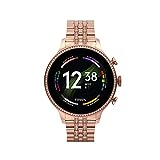 It is much easier for users to use the Fossil Gen 6 as a viable smartwatch thanks to Wear OS 3, which is more current than older models. But given the limited time users have had with the watch as yet, it’s difficult to say if that’s enough to justify a price tag comparable to other top non-Apple options like the Samsung Galaxy Watch 4.

As a result of its impressive 1.28-inch AMOLED display, the Fossil Gen 6 takes advantage of an elegant design. Its quick charging may not mean much if you still have to charge it every night if the watch can’t last long on a charge – if the battery can’t last more than a day, then its quick charging isn’t worth much.

As you’re here, we think you’ll enjoy our article on hybrid watches next. Check it out.