The Epix Gen 2 is still very new. This wearable was released in January 2022, and has been somewhat overshadowed by the Fenix 7 release. These smartwatches are often compared, with each of them coming out on top for different reasons. But, we think that will ultimately change with the release of the Garmin Epix 3. It’s also a matter of preference. Some people prefer the size options, solar charging and flashlight present on the Fenix range while others really like the AMOLED display on the Epix.

Are you a Garmin Epix user? Or are you just intrigued with what the brand will release next? Keep on reading to find out all we know about the third generation of the Epix range. Hint, it’s epic. 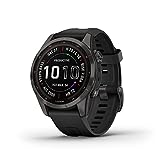 Why Compare The Garmin Epix 3 & Fenix 7?

If you’re wondering why the Fenix range keeps coming up in an Epix article, don’t worry. We’ll quickly clear the rivalry up.

In short, the Epix and Fenix range often battle against each other for the role of a complete fitness smartwatch. Both smartwatches are very similar now and offer similar premium features, smartwatch tools and offer attractive designs.

However, the key difference that sets the two apart is that the Fenix range comes with solar charging options and different size options ranging from the smaller 7S to the 7X. The solar charging and less energy-consuming display give the Fenix a better battery life, allowing users to enjoy the watch for longer. The AMOLED display on the other hand is very bright and looks and feels better overall.

Fenix is a non-AMOLED watch, and when the Garmin Epix 3 can match or beat its charge capacity, it’s game over for the range.

What Other Garmin Epix 3 Features Will We See?

Since the second generation of the Epix range was released earlier this year, many of the wearable features are currently up to date.

However, here are some additions we’d like to see on the Garmin Epix 3.

An on-wrist flashlight feature is more helpful than you might expect. Smartphone flashlights just don’t live up to the job, so we’d like to see a powerful light on the next model. The Fenix 7 received this update, so it’s possible for the Epix too.

The Epix 2 only comes in one size – a 47mm case with a 33mm display. While these proportions are attractive, there’s no smaller option for those with smaller wrists. A range of sizes is standard for most smartwatch ranges now, so we want to see this on the next release.

Current Epix users have some suggestions for future updates and models too. From customizable fonts to timezone graphics, some are asking for minor design changes. While these issues aren’t make or break, the small details will give the watch a perfect finish.

Finally, we would like Garmin to give us a better view and monitoring of our health. The new technology that is starting to become available today allows for :

We want to see all of this and more in the high-end Epix 3 offering from Garmin. Of course, these are our wishes and what will become available remains to be seen.

Likely, we won’t see the Garmin Epix 3 for a few years. The second generation has only just been released, and it’s already thriving. But, we’re already keeping our eyes peeled for possible news and updates about this exciting range. As alternatives you may want to consider the Fenix 7 range or even the Marq Gen 2. What do you think? Let us know in the comments.
Want to know more? See our daily news articles here.