The Fitbit Flex is not so easy to get your hands on these days as it’s been superseded by the Fitbit Flex 2. If you’re interested in dipping your toe into the Fitbit water with the first version of the Flex, you’ll find it comfortable, minimalist looking and water-resistant. 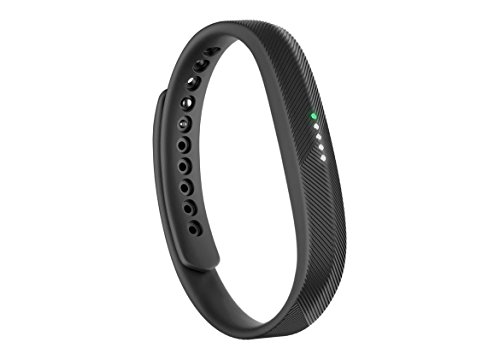 The Flex dates back to 2013 and fits in with the rest of its step and calorie counting siblings, offering the features we’ve come to love from Fitbit trackers.

The biggest change in the design offers the wearer some advantages. The sensor located on the back is secure and the position it naturally sits on the wrist has been reported as nothing less than perfection, offering zero irritation, even in sweatier times.

There’s another benefit for those interested in tracking their sleep. Where the Fitbit One offered the chance to monitor sleep with the use of an additional velcro armband at night, the Flex stays on your wrist all the time and you don’t need to do anything different to get the benefits of sleep tracking; it’ll do it without you even knowing (so long as you don’t remove it). Before a firmware update in 2015, one would have to put the watch in sleep tracking mode, but these days it’s automatic.

The band is simple with a basic join mechanism. Unlike alternatives like the Jawbone Up ($99.99), this model has two separate components which are simply the strap and the sensor. The sensor is smaller than before (for example, on the One). This is thanks to a lack of LED display.

There are 5 LED lights which display the number of steps taken each day. You activate these by tapping the screen twice.

Closing the mechanism on the band takes some getting used to because it’s not intuitive. Here’s where it’s not quite as comfortable as the Jawbone Up, but it’s no less functional.

You can have your pick of many colours of wristband for the Flex. It’s easily customised. You can even get a gold bracelet if you like as Fitbit have welcomed third party designers.

The wristbands can be quite costly but you get what you pay for. You also don’t have to swap them if you don’t want to.

If we look at the flex versus the Jawbone UP, the most obvious and immediate benefit is the wireless Bluetooth synchronization capability. Rather than taking the device off and plugging it in, the Flex doesn’t need this.

There is a limited number of devices available for this synchronization, though. Fitbit continues to improve its connectivity, though, and the later versions of most Fibit trackers have excellent performance with both Android, iPhone and even Windows phones.

The Flex comes with a USB dongle that you can use on either a PC or Mac. It works adequately, but mobile synching is far superior as you don’t need the cables.

The battery life is pretty good on the Flex, which is due to the minimal display drain on power. It will easily give you between 5 – 8 days between charges.

The Jawbone Up does have stamina for 9 days (this depends on how much activity you do). Getting one less day is an acceptable price to pay for the wireless synching function and better display options.

You can wear your Fitbit on either your dominant or weaker wrist; you just need to tell it which your preference is within your app.

Sleep tracking on the Flex needed some work. You might physically get up and out of bed multiple times in the night, say for kids, and the Fitbit will simply tell you that you were unsettled in the night.

Steps are quite generous so take them with a pinch of salt. Perhaps the sensors are sensitive, but the Flex has a tendency to record most movements as a step.

Compared to the Up in a comparison of 100 steps, the Flex comes out close to the mark.

The Fitbit app is user-friendly and intuitive. It drills down in your data and displays it in a digestible way.

If you’re tracking your food, you might want to connect a MyFitnessPal account rather than use the native food tracking, but this mostly boils down to preference. They both work well, but you get more features with MFP.

You can be social via the app, too. You can talk to friends and family and participate in challenges to keep you motivated.

If you’re an IFTTT user, you can automate a number of features which enhance your overall experience with minimal effort. Check out the IFTTT website for more specifics.

Overall, the Flex is an incredibly useful fitness tracking tool. If you’re a newbie to fitness, Fitbit has some welcoming arms to ease you into a new, healthier lifestyle.

The pioneering Flex is still worthwhile despite the launch of the Flex 2. The more accessible price, being one reason. You still get a great basic tracker and if you’re thinking of investing in something more high-tech and expensive in the longer-term, but are new to trackers, the Flex is perfect.

You have to take the accuracy with a pinch of salt; the algorithms bubbling away working out data in the Flex are a little primitive in comparison to newer Fitbit models, but that’s to be expected.

The wristband would use some improvement. Despite being comfortable and light on the wrist, it could be seen as a little childlike rather than a cool tech device. In fairness to Fitbit regarding this issue, they did welcome third party designers onboard to extend the band range.

Fitbit is a strong performer. The Flex is a wonderful option for anyone looking to join the family, but, be cautious as it’s not the best model on offer.

If this has wet your appetite, but you want to check out more Fibit offerings on the lower end of their range, read why we think the Charge 2 is still a great option.

For an updated comparison of Fitbit models click here.

The Garmin Fenix 7 is due to be released imminently. Naturally, there is a wide range of rumours circulating about what we can expect. If you are as excited as we are about it, … END_OF_DOCUMENT_TOKEN_TO_BE_REPLACED

There's no doubt that Garmin is one of the best smartwatch manufacturers in the world. However, the Garmin Vivoactive 4 was released in 2019, and we think that it's absolutely time … END_OF_DOCUMENT_TOKEN_TO_BE_REPLACED

In the tech sector, it’s fair to say that smartwatches are fairly hot property. So there are lots of upcoming and new smartwatches in 2021 that you might be interested … END_OF_DOCUMENT_TOKEN_TO_BE_REPLACED

When Mobvoi delivered the TicWatch GTH to China at the beginning of the year, it wasn't expected to release so soon! However, the TicWatch E3 is likely to be unveiled soon, and … END_OF_DOCUMENT_TOKEN_TO_BE_REPLACED

If you are a fan of Samsung watches, you've heard about the upcoming Samsung Galaxy Watch 4. There is currently no official release date, cost, or features list, so we will share … END_OF_DOCUMENT_TOKEN_TO_BE_REPLACED