The History of the Apple Watch

What Watch to Choose

Apple Watches are available either as GPS or GPS +Cellular versions; the main difference being that the Cellular type allows the user to operate the Apple Watch without the iPhone being anywhere near.

If you’re considering purchasing an Apple Watch but not sure which model will suit your requirements, read on as we compare and discuss Series 2, Series 3, Series 4 and Series 5. 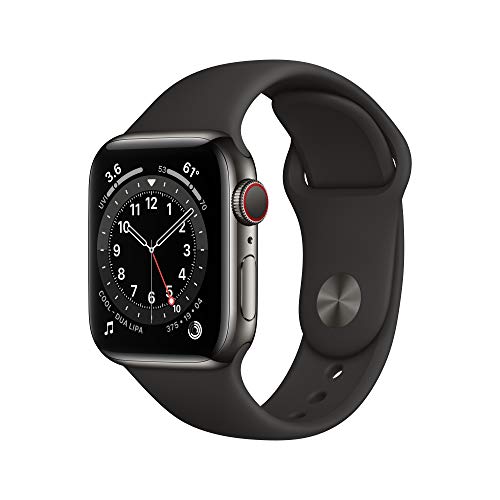 Until Apple Watch 4, the look of each device was similar. Apple Watch has a larger screen – between 40mm and 44mm – and also includes haptic feedback on the digital crown. Series 5 is available in either 38mm or 42mm versions.

Apple watches from Series 2 and up are all waterproof with a 5ATM rating. This means that they are suitable to wear in water depths of up to 50 metres for 10 minutes – so you can shower and swim with confidence. On the Series 3, Apple says that although water is able to penetrate the speaker, sound vibrations help to expel the moisture back out.

Each generation of Apple Watch has allowed for plenty of personalisation with colour and material options. More recent versions such as the Series 5 have a bigger library of options with case materials in aluminium, titanium, stainless steel and gold.  Series 3 GPS+ Cellular option was available in ceramic, but this particular casing was discontinued with the introduction of Series 4.

For added individuality, the wearer can swap the device straps to suit specific occasions. The Nike+ edition’s breathable strap sets it apart from the family. Furthermore, the Hermes in Series 4 has a great selection of fashionable straps.

Series 5 and 6 are the only Apple Watch to have the always-on display feature. Undoubtedly one of its stand-out characteristics. The always-on function allows the wearer to quickly and efficiently do the simplest of tasks such as checking the time. The watch face will highlight key information such as date, time and weather and are refreshed even when the wearer’s wrist is down. To assist with preserving battery life, the display can be dimmed by covering the watch face, or it will initiate the dim mode automatically when the wrist is down.

The Apple Watch has never been particularly power hungry, but with each generation performance has improved. Series 2 houses the S2 integrated computer/System on Chip (SoC). Whilst Series 3 hosts S3 and saw the introduction of the dual-core.  Series 4 and Series 5 both operate on a 64-dual core processor. This affords activity that is up to 2x faster than the S3 processor.

Despite no notable difference in the performance between Apple’s latest models, they retain their own unique SoC, S4 and S5 respectively.  Like the speed, each generation of Apple Watch has had more RAM giving the user more multi-tasking for their money; Series 2 at 512MB of RAM, Apple Watch 3 with 768MB and levelling off at 1GB RAM for series 4 and 5.

Apple has doubled the storage capacity with each new generation of Apple Watch; Series 5 boasts 32GB.

With all Apple Watches, there is no need for a separate fitness tracker. Each generation of the Apple Watch has an inbuilt heart rate monitor, an accelerometer, a gyroscope and an ambient light sensor. However, it wasn’t until Series 3 that the device gained an altimeter and a magnetometer (enabling compass functionality) in Series 5.

Fitness enthusiasts can mould the Apple Watch into their very own activity co-ordinator using a variety of health and exercise apps. Each series offering increasingly advanced options with added capability, for example, Series 3 has ‘Activity Rings’ which allows you to monitor your daily movements whilst the improved Workout App in Series 4 includes yoga and hiking and is able to identify what exercise is being undertaken automatically.

New and impressive for Series 5 is upgraded optical and electronic heart sensors allowing more accurate heart monitoring including ECGs which is being supported by the American Heart Association.

Series 4 and 5 offer the wearer added protection against falls. The device can detect a fall and will contact the emergency services if it does not detect any movement within a minute.

GPS is available on Series 2, Series 3, Series 4, Series 5 and Series 6 models, offering greater flexibility when out and about.

There is no notable difference in battery life between the range of Apple Watches. Each offering in the region of 18-24hrs of battery use.

Bluetooth and Wi-fi are standard installations on each Apple Watch, but there is the added advantage of the cellular option from Series 3 upwards.

With each generation of the Apple Watch, the user is provided with additional apps and creative Watch faces.

Like Apple’s smartphones, the brand’s smartwatches have a unique operating system labelled watchOS. WatchOS allows touch functionality and a whole directory of smart and fun features. It is watchOS that enables the device to be used for calling, texting, receive social media notifications and make purchases via Apple Pay. Like the iPhone Siri is also available on the range of Apple Watches and with Series 4 and Series the assistant works on a ‘raise to speak’ saving you having to wake it up with with a ‘Hey Siri’.

The current operating system is watchOS 7, and this will work on all version of the Apple Watch discussed here. Useful features in watchOS 7 include noise level notifications and you can now download apps directly, rather than having to use your iPhone.

Unlike its competitors, the Apple Watch range will only work with the iPhone; iPhone 5 running iOS 10 or later for Apple Watch Series 2 and for Series 3 either an iPhone on iOS11 or an iPhone 6.

The price you pay is dependent on the model, the casing, strap and the screen size. Apple Watches range in price from just under $200 for a Series 3 with an aluminium case and a sports band, all the way up to $1,500 for the special Hermes version of the Series 5. The new Apple Watch 6 costs around $500.

Which will it be?

Whichever Apple Watch you opt for it is clear they certainly offer a suite of standard features to suit a variety of needs, and you can keep up to date with the latest releases of the operating system, keeping your device functional.