Xiaomi Mi Band 6 vs Honor Band 6 – Smartwatches have become integral to our daily life. There is an abundance of smartwatches and fitness trackers available today, but only some are special. Xiaomi, the Chinese manufacturing behemoth, unveiled the Xiaomi Mi Band 6 fitness tracker in March (2021). Honor is another maker of respectable smartwatches, releasing their Honour Band 6 in China last November. But, the brand only announced the global availability of this smartwatch in March (on the 28th, 2021, to be exact).

Whenever a distinction is made between Xiaomi and close rivals, Honor bands, the outcome is usually the same. Mainly, both firms’ devices require an upgrade almost concurrently, resulting in minor distinctions between their devices. The price points of the referenced smartwatches are also comparable, further complicating the selection process.

Allow me to be candid. Xiaomi spent heavily on upgrading the Mi Band 6,  whereas Honor neglected to do so. If you’re looking for a fitness wearable with the best versatility and many sports modes, the Mi Band 6 is your best choice.

Additionally, it kept a few of the Mi Band 5’s exclusive capabilities. These provide features for monitoring female health and managing stress. There are functionalities that the Honor Band 6, and also the Honor Band 5, lack. The Honor Band 6 does, though, have everything you might expect in a health monitoring device. Sports of all types, sleep tracking, heart rate and SpO2 monitoring are also provided.

The Mi Band 6 is a dramatic improvement on the Mi Band 5. The architecture is more ergonomic, for one. Plus, the display is bigger and clearer. The 1.56-inch display is twice the size of its predecessor. Meaning, the Band 6 is about two-thirds larger than the Mi Band 4. What’s more, the display has an anti-fingerprint tempered glass overlay, guaranteeing a smudge-free experience.

There’s little improvement in terms of sensors, and as such, there isn’t much of a distinction between our two comparison devices here. Again, the Mi Band 6 kept all of its predecessor’s sensors. However, in addition to the SpO2 tracking capabilities, it has an extended sports mode. It also works with the 5’s latest features, such as tools for managing stress, guided breathing exercises, and menstruation tracking.

This band provides SpO2 tracking in addition to a 24/7 HRM. (Looking at predecessors for a moment, the 5 doesn’t have this functionality, which gave the Honor Band 5 an edge). Xiaomi, on the other hand, has made certain that this feature is available on the 6.

Users can monitor their blood oxygen levels using the SpO2 monitoring tool. The 6 now supports PAI (Personal Activity Intelligence), a feature first seen on the 5. The PAI function computes the score using user information like age, weight, height, heart rate, and other variables. Based on the rating, it would prescribe how to maintain good health.

At only 18g, the Honor Band 6 is a super light fitness tracker. A broader perspective allows you to see more detail at a glance. Nonetheless, you will need the Huawei Health app’s assistance to accomplish certain tasks.

SpO2 monitoring is included on the Honor Band 6, which can be used to assess the blood oxygen saturation level. It also tracks heart rhythm and stress levels based on the variability of the users’ heart rate over a 24 hour period. 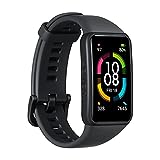 The Honor Band 6, like the majority of health trackers out there, has a variety of sport modes. There are outdoor and indoor running options, biking, indoor cycling, swimming, and free exercise. Furthermore, the Honor band 5 has three sensors: an electronic heart rate monitor, an accelerometer, and a gyroscope.

The water resistance rating of 5ATM makes it suitable for use as a sports fitness tracker. This implies that it is appropriate for submerging in water. The battery is a unique feature, too, as it weighs more than the Mi Band 4 battery. On the other hand, both devices have a battery life of up to 2 weeks between charges. Surprisingly, charging this band for ten minutes allows for up to three days of running time.

Who Wins? The Xiaomi Mi Band 6 or Honor Band 6?

Both versions are weather-resistant, have a long battery life, and have the same sensors. The Xiaomi Mi Band 6, on the other hand, has around thirty sport modes, whereas the Honor Band 6 offers ten.

There is a notable difference between the two units. Furthermore, the Xiaomi Mi Band 6 provides features such as stress management with guided breathing and menstruation tracking.

You are here: Superwatches > Buying Guides > Battle of the Sixes – The Xiaomi Mi Band 6 vs Honor Band 6