The Fossil Gen 7 is coming! Here is what I know, rumors, and what I want to see…

The Samsung Galaxy Watch 4 is head and shoulders above the Fossil smartwatch in the smartwatch market.

It will be much easier to recommend the Gen 6 Fossil smartwatch over other models running out-of-date software when Wear OS 3 is released in 2022. If the watch doesn’t get a new operating system upgrade, it won’t be able to compete with top non-Apple smartwatches like Samsung Galaxy Watch 4 and TicWatch Pro 3.

For this reason, I can’t recommend the Gen 6 over other wearables with longer battery lives. Even despite its elegant design and impressive 1.28-inch AMOLED display, even though it can be recharged in under an hour. If you want a high-end watch that works with both iOS and Android, the Fossil Gen 6 is a great choice.

Fossil could unveil its next-generation flagship wearable in as little as a few weeks. We now have the information we need to make an educated decision.

Fossil’s main smartwatch line hasn’t changed all that much over the years. When the Fossil Gen 6 was first released, it had a rounded face and large pushers. Underneath, however, significant enhancements have been made thanks to adding a blood oxygen sensor and upgraded Snapdragon processors. While the Gen 6 has made strides, it still falls short of the competition in several key areas. What about the Gen 7? Would it be able to put up a better fight than the Gen 6?

Here, I take a look at the current state of the Fossil smartwatch and make a wish list of improvements we’d all like to see.

So, when can we expect to see it?

For a long time, Fossil has used a sequential generation-based system to name its smartwatches. Fossil watches will be referred to as Gen 7 for the next generation.

I’d like to know when the new Fossil Gen 7 watch will be released.

A year after the release of the Gen 4 models, Fossil Gen 5 models went on sale in August of 2019. In September 2021, the sixth generation of the PlayStation 4 was released. According to this, it only makes sense that a release date of Q4 of 2022 is feasible for this new generation, Gen 7.

What features can we expect to see from the Fossil Gen 7?

The Fossil Group’s Gen 7 collection will feature only circular smartwatches. G&W discovered FCC listings in April 2022 for the DW14 and DW15, which confirmed this. Following the e-label information, both models have circular displays.

According to the listing, the FCC plans to release official images of the devices’ interiors and exteriors next month (July).

The Fossil Gen 7’s internals remain a mystery for the time being, but the FCC listing did provide some helpful information. The Gen 7 may still be able to charge wirelessly when the Gen 6 charger debuts with the next watch. Hopefully, this means that the device’s fast-charging capabilities will be kept.

Gen 6 technologies, such as the SpO2 sensor and GPS, are also expected to be re-introduced, along with the built-in speaker and heart rate sensor for Google Pay.

It’s also possible that Qualcomm will finally reveal its rumored Snapdragon Wear 5100 SoC. However, the omens are good for the Fossil Gen 7, with this chipset making its debut. Both the Gen 5 and Gen 6 models used Qualcomm’s new silicon.

If Qualcomm announces the Gen 7 chipset for the Wear 5100 watch before the Gen 7 is released, it’s a safe bet. We’ll have to wait for official word from Qualcomm on the development or distribution of the chip.

How much will the Fossil Gen 7 cost?

Let’s talk about the price of everything. When it comes to the Gen 7 watch from Fossil Group, we have only a vague idea of how it will be positioned.

The Gen 5 and Gen 6 retailed for $295 and $299, respectively, at the time of their release. If Fossil Group doesn’t include any more expensive features, the Gen 7 should cost around $300.

Customers of Fossil will have to wait for an upgrade or take a risk with the Gen 7 series until the latest Wear OS 3 platform from Google and Samsung are available.

It is expected that the Fossil Gen 7 will be running Wear OS 3 at some point, but Google has not stated when that will be the case for current or future devices. According to the tweet from the company, its watches will receive Wear OS 3.0 in the “mid to late second half of 2022.”

Wear OS 3’s launch beyond the Samsung Galaxy Watch 4 has been kept under wraps by Google.

More information about the Wear OS 3 developer program and Apple’s plans for support would be helpful. Because Fossil Group’s devices only run on Wear OS, a potential acquirer will be concerned about the availability and development.

The Fossil Gen 6 uses a newer version of the Wear OS 2 platform. Gen 6 watches from Skagen and Michael Kors will run on Wear OS 2 until the older devices can be upgraded to use Wear OS 3. (which does include the Gen 6).

This means that, for the foreseeable future, Fossil Group smartwatches will be unable to take advantage of any of the Wear OS 3 features and customizations currently available on the Galaxy Watch 4.

Read: Skagen vs Fossil – Which Brand Comes Out On Top?

For Wear OS 2, Spotify and YouTube Music can now allow offline downloads. In the first half of 2022, all Fossil Group Gen 6 devices will be equipped with Amazon Alexa capabilities. 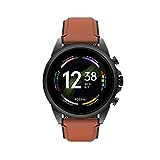 When the standard release of Wear OS 3 is ready for Fossil’s devices, it will be possible to use Wear OS 3 on iPhones. In a recent interview with Android Authority, Fossil Group addressed this issue.

Despite a significant increase in charging speed, the Fossil Gen 6’s battery capacity is not great. Even if the chipset is more efficient, this is still the wrong strategy. It lasted a full 24 hours with moderate use, but the GPS reduced that to a fraction of that time. Garmin’s and Fitbit’s wearables, like the TicWatch Pro 3, have a much longer lifespan than Wear OS alternatives.

With this model, I’d like to see Fossil Group improve the battery life on the Fossil Gen 7. Wear OS 3 may help, but users will be unhappy if it reduces battery capacity.

It isn’t one of the many smartwatches that do a good job of tracking sleep, and neither does the Fossil Gen 6. As crucial as deep and REM sleep is, we now also know that light sleep and bouts of restlessness are equally vital in assessing sleep quality.

When evaluating the role of sleep in daily health, it is critical to have reliable data to make an informed choice. Although the Gen 7 will not be a fitness-focused smartwatch, that doesn’t mean that Fossil can scrimp on the basics.

We would like to see the LTE function with a wider reach.

In its former versions, the LTE functionality only works with one network supplier. It would be most effective if Fossil expand its reach with the Fossil 7 generation.

The Fossil Gen 6’s display isn’t a deal-breaker, but I’d prefer to see it get a little sharper. The Gen 5’s 1.28-inch screen is retained in the Gen 6 with a few tweaks. Some more options are needed for this display. Wear OS 3 works flawlessly on the small 1.4-inch display of the Galaxy Watch 4. Fossil should meet this standard.

In most cases, a 3ATM water-resistant rating is more than adequate. The Gen 6’s shallow rating, on the other hand, may dissuade those who enjoy a casual swim.

This watch would be on par with other models from the Fossil Group and those that are less expensive if it were water-resistant to 5ATM (barrier to entry). Not a deal-breaker, but why settle for the Fossil when there are better-rated watches in the same price range?

Wear OS watch enthusiasts who want classically looking options might choose the Skagen Falster Gen 6 for their needs. Fossil Group is one of the few Wear OS watchmakers that continues to develop not just fashionable wearables but also high-end specifications.

There are many models to pick from, courtesy of the Fossil Group’s several sub-brands. A classic appearance, interchangeable bands, and plenty of health monitoring capabilities make the Fossil Gen line a great choice for any occasion. Fossil also offers several other excellent options. You may choose from sports, a fashion, or a hybrid watch from Fossil.

I think all of the above would be ideal for Fossil’s Gen 7.

Do you have a list of things you’d like to see? Let us know in the comments.

Superwatches
You are here: Superwatches > Brands > Fossil Gen 7 – Rumors for the 2022 Release