The eagerly anticipated OnePlus Watch has arrived, and it’s a refined smartwatch that can compete with the finest smartwatches currently on the market in terms of aesthetics, battery life, and simple fitness tracking functionality.

OnePlus has no plans to add its own app store. Although user input may sway the company’s decision, it’s unlikely the OnePlus will ever gain more capabilities than it possesses now, which is obviously restricted compared to an iOS or Wear OS-powered watch.

It does offer simple fitness measures and notifications, though.

OnePlus has gradually released upgrades to address software flaws. Including unique icons for notifications and an always-on screen option. Plus some general stability and efficiency enhancements.

The OnePlus Watch resembles a high-end smartwatch. The stainless steel case has a shiny finish, a pleasant contrast from most modern timepieces’ matte finishes or colored aluminum.

It’s also a big smartwatch. It’s 46mm wide and is quite heavy. So people with thinner wrists might be turned off. It will, however, appeal to those who prefer hefty watches, with an aesthetic that’s more refined than your typical wearable.

It also boasts some of the greatest battery life seen on a smartwatch. It’ll last close to 7 days on a single charge and charge from nothing to full in 30 minutes. 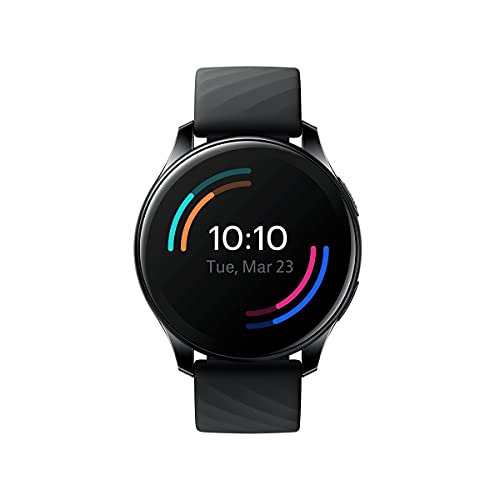 Should you get the OnePlus Watch?

Want a smartwatch that will last all week. You’ll have to charge it much less often than rival smartwatches, even after 5-6 days of heavy usage.

Want a smartwatch with a sophisticated appearance. The OnePlus Watch has a sleek design and a beautiful shine on its metal casing, which is one of its finest qualities. It’s large, yet not bulky.

Need applications on your wrist. One of the most significant flaws is how it cannot support the installation of current WearOS or watchOS applications and applications from other operating systems. Choose an alternative watch if you prefer more than what comes preloaded.

Want your gadgets to be more interconnected. The OnePlus Watch will connect to your smartphone, Bluetooth headphones, even the OnePlus TV. If you want something that connects to a larger network of gadgets, the Apple Watch is the way to go.

Are looking for a compact timepiece. There’s no denying that the OnePlus is large. It’s one of the broadest watches on the market, with a 46mm casing. Consider a Samsung Galaxy Watch Active 2 if you prefer a smaller gadget with a similar design.

The OnePlus is stylish with a gleaming finish and sleek design that makes it seem more expensive than it is. It only comes with one size option, which may be a little big for people who prefer a compact wearable.

The face is 1mm bigger than the Samsung Galaxy Watch 3’s bigger 45mm version. While it misses the latter’s rotating bezel, the OnePlus Watch features the very same 1.4-inch display as Samsung’s flagship watch, but due to a black bezel underneath the flat glass, you’d think it was bigger.

The fluoroelastomer (rubber-like) watch band is broad and thick but not fragile. And this means it’s secure on the wrist to offset the watch’s substantial weight. When contrasted to the flat wristbands on certain smartwatches, the rivulets flowing down the side of the strap are a lovely touch.

Apart from some attractive watch faces, the display is crisp and bright, making use of the AMOLED technology to reveal deep darks. But given the basic UI and limited amount of applications, there isn’t much here to use the display. However, you can swap it in the accompanying OnePlus Health smartphone app.

The display is responsive to touch controls, but navigating the apps and interface necessitates using two physical buttons on the right of the case. Though the top one is engraved with ‘OnePlus,’ its texture helps distinguish the buttons. Finally, the bottom button can be configured as a shortcut to any of the apps.

The OnePlus offers adequate, though simple, fitness and health monitoring capabilities, which is sufficient for its pricing; however, it may disappoint those seeking more intense workout assistance options. If so, check out Garmin.

When you open the Workout app, you’ll discover 14 fundamental choices, ranging from jogging and swimming to climbing, cricket, badminton, and others.

With IP68 water and dust proofing and 5ATM water resistance, the watch automatically recognizes workouts while running. It keeps track of your heart rate, blood oxygen saturation, and stress levels. Though this can be done manually, too, using specialized applications. As well as distance, calories burned, and swimming pace.

The watch also monitors activity progress using 4 metrics: steps, workouts, calories burned, and activity duration. All of which can be seen in the Activity app as well as on various watch faces. A newer OnePlus Health smartphone app, which is now available on Android and soon on iOS, provides more sophisticated health information.

To get the most out of the OnePlus, you’ll need the OnePlus Health app, which lets you connect the wristwatch with your phone and adjust the latter’s advanced settings.

The OnePlus Health app has a surprising amount of functionality, including breakdowns on monitored parameters, shown in graphs with day, week, month, and year breakdowns. While our exercise analysis often revealed incorrect GPS location tracking, they are broken down into comprehensive results useful and straightforward to read for many categories: heart rate, pace per mile, cadence, and more.

Finally, we’d like to point out that, despite its size, the OnePlus Watch was not difficult to work out with. The broad base distributes the watch’s weight out, and the broad band keeps it tight. You won’t forget it’s there, but it won’t weigh you down or throw off your balance.

The OnePlus Watch chipset is unknown. But we know there’s 4GB of onboard storage, with 2GB accessible for media.

Users report no hiccups or slowdowns when pushed through a variety of activities. But given the small number of preloaded applications, there’s little wiggle room for errors anyway.

The OnePlus does not run Google’s WearOS. Impressively, it runs on OnePlus Watch OS, its own system. There are advantages and disadvantages to this. On the positive side, we don’t see WearOS watches approaching the OnePlus Watch’s battery efficiency.

On the other side, this implies that the OnePlus will be limited to its pre-installed applications. These have highly readable interfaces and cover all the basics you’d need – exercise, heart rate, blood oxygen sensor, time features, and so on.

However, the OnePlus is less expensive than more customizable smartwatches. Take the Apple Watch or Samsung Galaxy Watch 3, for example. They would cost almost twice as much if you wanted more applications.

The OnePlus is compatible with many Bluetooth earphones, and it can allegedly link to the OnePlus TV to serve as a smart remote, turning the TV off when the user falls asleep (we didn’t have a device to connect with).

The battery is one of the OnePlus’s biggest advantages over the competition. It not only lives up to the company’s promises of 7 days of battery life under normal use but also recharges quickly.

This capacity, according to OnePlus, offers up to 14 days of continuous usage or one week of battery life for highly busy users, which is much longer than most other smartwatches. Other fitness-oriented wearables with similar battery life don’t have as large a display as the OnePlus.

Smartwatch batteries aren’t enormous, and most recharge in under an hour, but considering how long the OnePlus lasts, it’s quite impressive.

So is the OnePlus Watch worth the hype?

In conclusion, the watch seems to be of better quality than most alternative wearables at this price point, which is less than half of similar Apple Watches and Samsung Galaxy Watches. So it might not have as many features as more expensive competitors, and it will only work with Android for its accompanying smartphone app (iOS is in production), and it won’t be able to load additional applications, but it’s a decent device for the price.

You are here: Superwatches > Reviews > OnePlus Watch 2022 Review – Is it worth the hype?