Will you be considering the Fitbit Charge 6? The next generation of the brand’s flagship fitness tracker is an exciting concept, but what can we actually expect?

Fitbit has been in and out of the news lately thanks to its collaboration with Google. As some smartwatch fans may know, the new Google Pixel watch will come with Fitbit integration. However, if you’re looking for a fitness tracker (not a smartwatch), you may want to wait for the next Charge 6 model.

We’ve compiled all you need to know about the future Charge 6. We’re making predictions for this next flagship wearable, from potential features to upgrades users want to see.

Ready to learn? Keep reading to find out more.

About The Fitbit Charge Range

The Fitbit Charge range is one of the brand’s most popular releases.

Currently, the newest model of the range is the Charge 5, one of the most popular trackers on the market for obvious reasons. With a fusion of health and fitness monitors, plus an attractive yet comfortable design, the Charge 5 seems to tick every box.

While the Charge 5 still holds up as one of the best fitness trackers, there’s always room for improvement. Especially when smartwatch technology keeps upgrading! This fitness tracker has been on our radar for a while now, and though we love it, it’s time for a few updates. 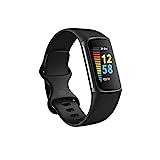 It’s time for a new and improved Charge 6 smartwatch!

Can we expect a significant leap in tech advancements again?

Well, there actually haven’t been any leaks on this new watch yet! This is great since it leaves the following model as a mystery, but it doesn’t give us too much information to work with.

Instead, we’ll focus on the logical progression of features for this smartwatch.

What Updates Do We Want To See On The Charge 6?

We know the model’s strengths and weaknesses thanks to our experience with the Charge 5. We love many Charge 5 features, but we can also see areas that need improvement.

Here are the critical updates users are expecting for the Charge 6.

Fitbit offers undeniably popular health trackers. The Charge range has accurate sensors, allowing users to see an overall picture of their health. There is a slight issue with the current setup, though—the Fitbit Charge 5 only syncs with Fitbit Premium and a handful of third-party apps.

Going forward, we’d like to see compatibility between the Charge 6 and iOS health apps and Google Fit.

Google purchased Fitbit in 2020, but we haven’t yet seen a sync between Fitbit devices and Google Fit. Hopefully, Charge 6 will be the model to bring these concepts together.

Unfortunately for Apple fans, the CEO of Fitbit isn’t too keen on working with their competitor, so you’ll have to find alternative ways to monitor your health data. Third-party apps, such as RunKeeper or MyFitnessPal, are your best options.

If there’s one thing to praise the Charge range on, it’s the flawless sports band design. This watch is optimized for getting active with multiple color options, a sleek rectangular screen, and a comfortable band.

Though many users love the Charge bands, some report that they break after frequent usage. Perhaps we’ll see the Charge 6 released alongside stronger or re-designed bands. We’d also like to see some extra colors, as the three options are quite muted. Adding bright colors to workouts may attract new customers.

Also, it would be good to see the return of a physical button again in terms of design. This was present on the first model and the Charge 2, but the larger button was scrapped when the brand released the Charge 3. Instead, the new design offered an ‘inductive’ button. Though this completes the smooth look, this button doesn’t always register clicks – frustrating when you’re mid-workout.

Another design change suggestion is to increase the size of the display. Though the Charge 5 already offers a clear display, Fitbit could tweak this slightly to offer better visibility – like the Apple Watch 7’s screen update. However, we doubt this is the brand’s priority.

One feature Fitbit fans have been calling for is incident detection. This feature isn’t yet present on ANY Fitbit devices, leaving users frustrated.

From standard fall detection to SOS calls, it’s essential to have emergency features on smartwatches. Not only do they keep users safe, but they can end up saving lives! Fitbit’s key competitors are now offering fall detection in one form or another, so it’s time for the brand to step up.

Hopefully, the Charge 6 will include this necessary feature, and we hope to see it on every subsequent Fitbit model!

Have you ever settled a bill with your watch? It’s a liberating feeling! On-wrist transactions take contactless payments to an entirely new level.

The Charge 5 watch does offer Fitbit Pay, but we would love to see the addition of Google Pay, Samsung Pay, or even Apple Pay.

Fitbit Pay made sense when the brand was independent, but we think it’s time to offer additional payment methods since their Google acquisition. This is easier for users, but it saves them time and effort in setting up an extra Fitbit Pay account. Plus, there are frequent reports of Fitbit Pay being buggy so Google Pay might offer a seamless alternative.

For example, the Charge 5 already offers third-party apps, yet we’d like to see more. This would improve the fitness experience and boost the wearable into a competitive position.

And these are only a few of the health-focused apps. But, when compared to the Apple Watch, the Charge 5 falls slightly flat.

The current Charge 5 doesn’t offer a dedicated altimeter. Instead, this smartwatch uses GPS signals to calculate your elevation. This isn’t always as accurate as an altimeter – so we’d like to see this feature on the Charge 6.

An altimeter helps smartwatch users calculate their altitude by measuring atmospheric pressure. This isn’t needed for daily life, but it’s essential for those who enjoy hiking, trail running, or mountain sports.

Music streaming on Fitbit devices is slightly limited, especially if you’re an Apple Music it Spotify user. We’d love for these two platforms to be included on the Charge 6, alongside Deezer, Pandora, and other popular streaming options.

We’d also like to see the Charge 6 give the option to play music without your smartphone nearby. Right now, your smartphone must be closeby, but an LTE option would allow users to run with ease.

Some users dismiss watch faces are a more ‘frivolous’ element. But, your watch face is the first thing you see when you look at your fitness tracker!

Fitbit watches, in general, offer modern watch faces. However, the Charge 5 only offers 23 different options. Perhaps designers will offer more designs or the option to customize more watch faces. Style is important for some users!

Alongside current Charge 5 fitness features, health trackers, and general smart features, what updates can we expect from the Charge 6?

The main pull factor to smartwatches is their abundance of premium features. The Charge 5 already offers the most in-demand features, but there are some additions we’d like to see.

While we’ve spent a lot of time examining the Charge 5 and its pitfalls, it’s important to remember that this wearable is top of the range, and many users love it! Many key features, such as sports modes, heart trackers, and sleep monitoring, are already perfected, and we’ll see these on the Charge 6.

What Features Are Users Calling For?

Talking to current users or checking the Charge 5 forums tell us what REAL Charge fans are actually looking for. This is the best way to gauge which features need a makeover.

Alongside these potential features, users of the Charge 5 are calling for additional sports modes.

While the Charge range already carries many diverse sports options, Fitbit users would like to see gym equipment integrated into the watch. This includes stationary gym bikes, NuStep, and more. Adding these to the Charge 6 would enable gym-goers a more comprehensive experience.

Other user requests include removing milestone celebrations and instead focusing on the training data. Some complain that the pop-up awards block the screen for too long. However, these awards are motivating and add fun to working out.

Are you getting excited about the Charge 6? Hopefully, you won’t be waiting too long until this new wearable is on your wrist.

Though we have no definite information about the launch date just yet, we can predict an approximate date for the Charge 6 release.

We expect this wearable to be hitting stores around Summer 2023. This places it at 18 months after the Charge 5’s release, following the standard pattern of Fitbit devices. However, it’s also possible that the watch could launch alongside the IFA in Berlin, setting the date back into September 2023.

The past Charge releases are:

From this, we can see the more-or-less 18-month release pattern. Hopefully we’ll be able to the next model in soon!

What Will The Price Be?

Fitbit is known for offering affordable wearables, but the Charge is their flagship range. This places the devices slightly above the rest in terms of price and features.

The Charge 5 currently retails for $180, which is expensive compared to other Fitbit ranges. We expect the Charge 6 to sit at the same price point when released, and the Charge 5 will likely drop in price.

However, due to recent inflation increases, we could see the Charge 6 debuting slightly above $180. This could leave it at approximately $200, especially if we see the cost of living rising. Materials and components are also facing shortages, and these factors could affect the final price too.

Fitbit is known for changing the price of its wearables a month or two after launching. Keep an eye on the Charge 6 when released, and you may end up with an affordable deal.

Fitbit’s Charge range is one of the best fitness tracking options on the market right now. With an abundance of metrics, health trackers, and a lightweight design, the Charge 5 is already a winner. But there’s always room for additions! The Charge 6 is set to offer a whole new fitness tracker experience, and we can’t wait.

Will you be trying out the Charge 6? Let us know in the comments!